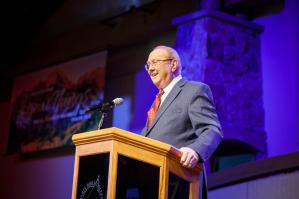 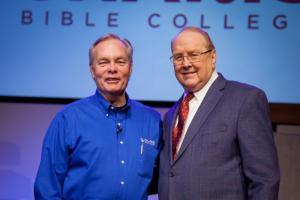 If you would like to view this talk in its entirety, please go to CharisBibleCollege.org and click on video archives.

WOODLAND PARK, COLORADO, UNITED STATES, September 25, 2017 /EINPresswire.com/ — Dr. James C. Dobson, founder and president of Family Talk, addressed a local audience of over 700 students and staff, as well as community visitors, at Charis Bible College in Woodland Park, Colorado. Andrew Wommack, founder of Charis Bible College, and Dr. Dobson have, over the last few years, collaborated on projects surrounding the defense of marriage and the family.

Dr. Dobson’s presentation began with a short video commemorating Dr. Dobson’s 40th anniversary of devoting himself to the preservation of the family and providing resources to support marriages and families in need. The video included many of his achievements, such as advising five presidents and serving on six federal commissions. It has been documented that he is one of the most influential evangelical leaders of his time.

From his decades of insight, he spoke to the gathering from his heart saying, “If you live long enough, life will trash your trophies.” As a two-time college tennis champion at Point Loma Nazarene University, in Point Loma, California, Dr. Dobson realized his freshman dream to see his name on the tennis trophy in the PLNU trophy case. Humorously he told the audience of how fifteen years later, a friend found the discarded tennis trophy in the university’s dumpster. To the surprise of the audience, Dr. Dobson pulled out the trophy from under a blue cloth and the audience broke out in laughter. After surviving a heart attack twenty-seven years ago, and Dr. Dobson emphasizes how very few experiences in life pass the “end-of-life test.” He closed his talk by saying, “There are only three things that stand the test of time: who you love, who loves you, and what you’ve done in the service to the Lord.”

If you would like to view this talk in its entirety, please go to CharisBibleCollege.org and click on video archives.