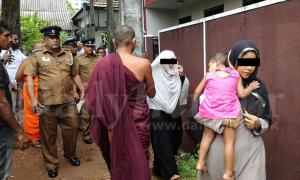 Transnational Government of Tamil Eelam (TGTE) today urged UN to intervene urgently to protect Rohingya Muslim refugees in Sri Lanka, where they are under attack by Buddhist Monks.

“These are Rohingya terrorists who killed Buddhist monks in Myanmar,” the monk said in his live commentary on Facebook, pointing to Rohingya mothers with small children in their arms.

Sri Lanka’s Buddhist monks have very close links with their counterparts in Myanmar. Both have been accused of orchestrating violence against minority Muslims in the two countries.

Earlier, Sri Lanka Prime Minister threatened to deport these Rohingya refugees, saying “ They can go to neighboring countries like Bangladesh and Thailand."

A UN report in February 2017 claims the Myanmar army’s campaign targeting the Rohingya involved mass killings, gang rapes and the burning down of villages, likely amounting to crimes against humanity and ethnic cleansing.