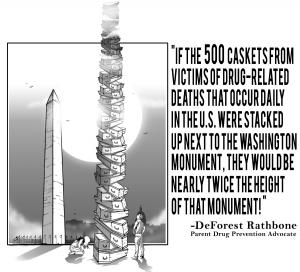 Daily Drug Deaths–The Coffins Would Tower Over the Washington Monument

Federal Government Must Identify Root Cause of Mass Shootings

We urge all citizens to demand that the Federal Government begin requiring forensic drug testing in all incidents of violent crime, similar to current national policy for traffic fatalities.”
— DeForest Rathbone

WASHINGTON, DC, USA, November 28, 2017 /EINPresswire.com/ — Fake-news is reporting that a “dispute with his mother-in-law” was the motivation behind the mass murderer who savagely massacred the full congregation of helpless innocent worshippers at the Baptist church in Texas on 11/5/17. But the more likely explanation is his use of drugs. More recently in California, a marijuana-involved maniac randomly killed or wounded 14 during a mass shooting that ended at a school; yet another case among the soaring drug-related massacres.

We parents who are long-term drug prevention activists know of many scientific studies documenting that marijuana is a psychosis-inducing drug, see link: https://www.ncbi.nlm.nih.gov/pmc/articles/PMC4352721/

Thus, from this killer’s home town court file citing psychiatric issues in his arrest record, and his high school record of drug-related offense (Washington Post 11/13/17) there is a high probability that psychosis-inducing marijuana was a primary contributor to the derangement of this merciless murderer. See evidence of the connection of marijuana to other widely publicized vicious murderers at link: http://bit.ly/marijuana-violence-law

However, in order to verify that this mass murderer’s use of marijuana may explain the “unknown” motivation for his otherwise inexplicable evil acts, the Texas authorities should ASAP publicize the results of forensic drug testing of the killer’s hair, saliva and blood which contain scientific evidence of his use of any drug known to cause psychosis including the gateway drug, marijuana.

The stubborn refusal of government officials to produce this vital information constitutes a de facto cover-up of the malignant impact of marijuana on America’s soaring mass murder rate. And the main reason this vital information is being covered up is the corrupting influence of drug money on too many public officials. See example from Maryland in our 3/17/17 article, “Lawmakers Corrupted by Drug Money Ignore Marijuana Harms.”

Therefore we urge all citizens to demand that the Federal Government begin requiring such forensic drug testing in all incidents of violent crime, similar to current national policy for traffic fatalities. When finally adopted, this new drug prevention strategy could verify the motivation in most mass murders: Insanity from Psychoactive Drug Use! This key knowledge can provide the “Truth which shall make ye free” from the slavery, tyranny and terrorism of addictive drugs.

We believe that if a coalition of faith leaders and national parent drug prevention experts were to persuade government officials and media journalists to endorse mandatory forensic drug testing of violent criminals, it could cause a sea change in America’s universally acknowledged drug death crisis.

DeForest Rathbone is a long-time activist in the parent drug prevention network. He is Chairman of National Institute of Citizen Anti-drug Policy (NICAP). He lives in Leonardtown, Maryland.