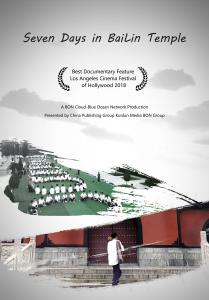 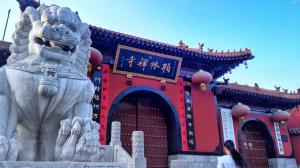 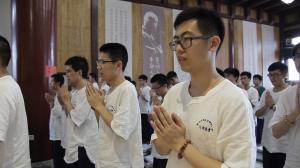 LOS ANGELES, CALIFONIA, US, July 4, 2018 /EINPresswire.com/ — The Buddha once said, “There is no path to happiness; happiness is the path.” Perhaps this is truer than ever if the announcement on June 28, 2018 is anything to go. The one-of-a-kind documentary, “7 Days in Bailin Temple", produced and directed by Helene Zhuge, won the Award for Best Documentary Feature at the Los Angeles Cinema Festival of Hollywood, being held on July 6th, 2018 in Santa Monica, Los Angeles.

The 40-minute film is about the lives and reactions of five Chinese college students, who spend a week living a life not dissimilar to the resident Buddhist monks in the ancient environment of Bailin Temple in China’s Hebei Province. Cameras capture general conversation, daily events that open the mind, candid moments, and life-changing discussions between students and senior monks. At the heart of “7 Days in Bailin Temple” we witness the journey of students who discover if they have a place in their hearts and minds for Zen Buddhism.

Only 100 years ago, Buddhism was considered to be a ‘quack theory’ in the USA, yet after only a century, mindfulness is even taught in schools across North America and Western Europe. Now with an estimated 5 million practicing Buddhists in the United States of America alone, it has become the premier spiritual practice of the business elite. Americans generally view Buddhism favorably, while in Canada it is viewed equally as favorably as Christianity, according to the Pew Research Center.

Winning the 2018 Award for “7 Days in Bailin Temple” could be described as a bolstering of the indelible mark Buddhism has made on popular Western culture. From the days of The Beatles, who travelled to India in 1968 to meet the Maharishi Mahesh Yogi, to other modern-day proponents of the philosophy such as celebrities Orlando Bloom and Oliver Stone, Buddhism finds itself cemented into Western society, a living force that continues to intrigue and fascinate the people at large. If anything, “7 Days in Bailin Temple”, presented by BON Group and China Publishing Group Kunlun Media, is a golden opportunity to bring renewed understanding of Chinese Buddhism to Western popular culture in an award-winning film format.

Located a short hop from central Hollywood, the Los Angeles Cinema Festival of Hollywood offers independent filmmakers the opportunity to have their work recognized, judged and awarded at the very epicenter of the world’s film industry. In its 9th year, it is a traditional festival looking to showcase entertaining domestic and international materials from talented independent filmmakers.

At this year’s festival, “7 Days in Bailin Temple” is awarded Best Documentary Feature by a panel of independent judges and film critics, making it a trailblazer in its own right. As well as being the first time an independently Chinese-made documentary has won such an award, it is also surely a catalyst for all Chinese filmmakers to tell their story of China to the world. The LACFH recognizes and awards talented independent filmmakers and writers, thereby helping them to increase their distribution and project funding opportunities, thus engaging with the film community and new audiences alike.

The film is to be screened at Santa Monica’s Promenade Playhouse on the evening of July 6, 2018. Watch out for the official release of the film and distribution later in 2018.