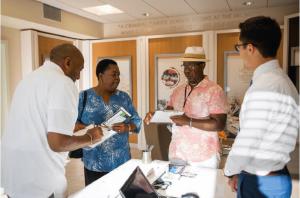 For the most part, the filmmakers who screened their films here were not parishioners, but they share a desire to see social issues brought front and center”
— Lisa Mansell, Scientology representative

CLEARWATER, FLORIDA, USA, September 27, 2018 /EINPresswire.com/ — On Saturday September 15, socially-minded people from across the Tampa Bay area converged in Downtown Clearwater for the inaugural Tampa Bay Humanitarian Film Festival. With 33 films screening in the time span of only 5 hours, guests were able to watch films that suited their interests.

Sponsored by the Church of Scientology Flag Service Organization, along with United for Human Rights Florida Chapter, the Way to Happiness Association of Tampa Bay, the Florida Chapter of the Foundation for a Drug-Free World and others, films were screened in nine different humanitarian centers along North Fort Harrison Avenue.

These films included the award-winning short films “Two Strangers Who Meet Five Time” by Marcus Markou and “A Little Pause” by Ayesha Jhukla. Feature films screened included “Time Simply Passes”, a documentary about James Richardson, the Florida man wrongly imprisoned for twenty years and “Drug Addiction In America,” a documentary of how the opioid crisis hit a West Virginia town with a vengeance.

“We had excellent feedback from those who attended,” said event organizer Lisa Mansell. “We are definitely looking at doing this festival again. For the most part, the filmmakers who screened their films here were not parishioners, but they share a desire to see social issues brought front and center. Film is a powerful medium to communicate the human condition and raise awareness.”

An attending pastor commented “I have to say that the movies were very inspiring. The message gives you a sense of why you should appreciate others and help one another.”

About the Church of Scientology

The Scientology religion was founded by American author and humanitarian L. Ron Hubbard. The first Church of Scientology was formed by Scientologists in Los Angeles in 1954. Today the religion spans the globe with more than 11,000 Churches, Missions and affiliated groups across 167 nations. Social responsibility is a logical extension of spiritual values, and since the founding of the Church of Scientology in 1954, Scientologists have been actively involved in service to their communities.

Humanitarian and Social Betterment programs sponsored by Scientologists and like-minded groups include: United for Human Rights, The Way to Happiness, The Foundation for a Drug Free World, the Scientology Volunteer Ministers, the Citizen’s Commission on Human Rights and Criminon.