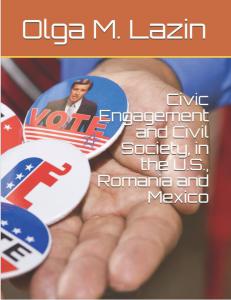 Civic Engagement and Civil Society, in the U.S., Romania and Mexico

MIAMI, FLORIDA, UNITED STATES, October 30, 2018 /EINPresswire.com/ — The books are definitely coming to downtown Miami as the nation’s finest literary festival, the Miami Book Fair International holds its annual celebration. This eight-day literary party will commence on November 11 with over a hundred-thousand readers and writers in attendance. Distinguished authors from the United States and other parts of the globe, as well as book lovers, will be gracing the Fair and its many activities.

AuthorCentrix celebrates its second year as one of the exhibitors at the Fair. The company will be gracing the event with Olga M. Lazin and her Memoir – Civic Engagement and Civil Society, in the U.S., Romania and Mexico. This year at the Fair, she brings to the readers, a reference that shows how accountability looks and action against organized high-level corruption. A chance for one-to-one Author Interview and Book Signing with Lazin await everyone!

Civic Engagement and Civil Society, in the U.S., Romania and Mexico guides the readers on how to keep governments accountable, and civic culture alive. The book focuses on the Clean Money campaign, and Blockchain technology is shaping the future of direct voting, symbiotically ensuring honest and clean elections in the U.S. The U.S. Tax Exempt organizations Law is analyzed, and the fourth sector of the society is highlighted, as being the model for other nations that need U.S. Funding of not-for-private-profit organizations. Mexico and Romania are test cases and recipients of U.S. funds, and use the functional blueprint that is the U.S. not-for-private Tax Law.