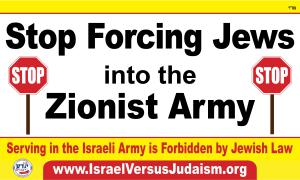 A mass demonstration will take place Today, at 4:00 PM, in front of the offices of Friends of the IDF at 60 E. 42nd Street, near Grand Central Station.

The Orthodox community has always avoided service in the Israeli army due to their belief that it is forbidden by Torah law to establish any Jewish state, or to fight wars against other nations”
— Rabbi Aron Jacobowitz

The subject of the demonstration is to protest the Israeli government’s recent policy to recruit religious females into their army, which is forbidden according to Jewish law. Those who refuse to serve are treated brutally, imprisoned or subjected to other harsh penalties. Peaceful demonstrators, who protest publicly against the government’s policy, are being met with extreme force, dispersed by inhumane means, such as horse trampling, water cannons and stun grenades, causing bodily injuries to men, women and children.

The Orthodox community has always avoided service in the Israeli army due to their belief that it is forbidden by Torah law to establish any Jewish state, or to fight wars against other nations,” said Rabbi Aron Jacobowitz, a spokesman for the rally. “Jews follow the Torah, serve G-d and are loyal citizens of the countries they reside in –that is indeed how Jews have lived historically during many centuries, including the Holy Land prior to Zionism. Zionism is a new, heretical movement that attempts to replace religion with nationalism and, in effect, destroys Jewish belief and practice. The Israeli government’s primary motive with the current forced conscription laws is to assimilate religious Jews into their culture and society.

“Anti-Zionist Jews, as conscientious objectors, deserve the right to be exempt from service in the Israeli army, as set down in UN Commission on Human Rights resolution 1998/77.

“We call upon all caring humans who value freedom: make your voices heard and send your message of protest to the State of Israel. Ask your senators, congressmen and other persons of influence to denounce Israel’s reign of terror against the Orthodox Jewish community. Demand that they grant us the elementary rights to freedom of speech, freedom of the press, and above all – freedom of religion.”