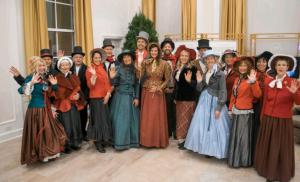 The Church of Scientology choir will be the opening act for the Community Holiday Party at the Scientology Information Center on December 14th welcoming guests of all ages.

As 2019 is just around the corner, we wanted to give the community a chance to enjoy themselves before the start of a whole new year.”
— Amber Skjelset, Center Manager

CLEARWATER, FL, US, December 13, 2018 /EINPresswire.com/ — On December 14th the Scientology Information Center will host a Holiday party for the community featuring local performers, Joe Yazbeck and Greg Smith and the Church of Scientology Choir.

Joe Yazbeck is a veteran recording and performing artist who has recently released two popular albums Streets of Your Heart and the holiday favorite Jazz’d About Christmas. Joe has performed nationally with his band Heartdance and continues to perform at special events and venues. Joe has also performed as part of national touring companies of Broadway shows.

Greg Smith has been playing guitar since 1966 and has played in many styles ranging from classical, through rock, blues, country, straight ahead jazz, smooth jazz and free jazz. He has played all over the United States with well known artists such as Chic Corea, Edgar Winter, Larry Coryell, Jeff Berlin, Glen Zotolla, Randy Sabien and Brian Torff. Currently he performs around the greater Tampa Bay area as a solo acoustic guitarist, with the New York Guitar Carts, numerous duos, the Heartdance band and more.

The Church of Scientology Choir first originated in the United Kingdom in the 1960’s where early Scientologists put the concepts of their religious beliefs to song and to celebrate their spiritual advancements in their pursuit of spiritual freedom. The Church of Scientology Choir of Clearwater began in the 1993, to continue that tradition. As a volunteer group they love music and singing and their goal is to perform as often as possible to reach out into the community to lift spirits everywhere.

Yazbeck and Smith will provide a “smooth and mellow” flair, while the Choir will have songs that will encourage kid participation with hand-held bells and percussion sticks. The event includes holiday-inspired refreshments and a chance to meet with the artists afterwards and take photos.

“The songs will be Holiday favorites of all genres and all styles,” said event organizer and Center Manager, Amber Skjelset. “They’ll be the kind that you can’t help but sing along with and reminisce. As 2019 is just around the corner, we wanted to give the community a chance to enjoy themselves before the start of a whole new year,” said Skjelset.

Mr. L. Ron Hubbard for those who are curious.

To attend this event or learn more about the Scientology Information Center or the 2019 calendar of events please contact Amber Skjelset at (727) 467-6966 or email amber@cos.flag.org.

The Scientology Information Center, located in the Historic Clearwater Building in downtown Clearwater, opened on July 11, 2015 and currently houses a gallery of audiovisual displays with some 400 videos. The center is open to all and provides a self-guided tour showing basic Scientology beliefs, Churches around the world, ongoing social programs and the life of L. Ron Hubbard, Scientology’s founder. The Center offers tours to the broad public and civic leaders; holds concerts, theatrical performances and receptions for the community; and opens up the use of its conference room to social, civic and non-profit groups.