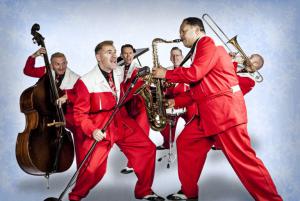 When they performed last year, the over 1,000 guests were swinging and jiving.”
— Clemence Chevrot, Director of the CCV Center

An earlier release announced the Jive Aces performance at Winter Wonderland for the wrong date. Below is the corrected release and date

On December 16th, the United Kingdom’s Jive Aces will bring holiday cheer to Downtown Clearwater's Winter Wonderland with a concert performance for all to enjoy. There is no cost to attend. Winter Wonderland is located on the corner of Drew Street and N. Fort Harrison Avenue, in downtown Clearwater and is sponsored by the Clearwater Community Volunteers (CCV) and the Church of Scientology Flag Service Organization.

The Jive Aces are a 6-piece swing band, formed in the UK in 1989. They have performed in over 30 countries and have been recognized as one of the top swing bands in the world. In 2012, they were finalists of Britain’s Got Talent and have received many accolades and awards for their music.

The Jive Aces’ performance is in addition to the usual Winter Wonderland activities that include: decorating cookie with Mrs. Claus, visiting with Santa and his elves, petting baby animals, riding ponies and the Winter Wonderland train, sliding down the 20-foot slide, jumping in Winter Wonderland’s bouncy house and spinning on the human gyroscope.

“We love it when the Jive Aces come to Winter Wonderland,” said Clemence Chevrot, Director of the Clearwater Community Volunteers Center. “When they performed last year, the over 1,000 guests were swinging and jiving.”

Winter Wonderland will be open every day from 6:00pm to 9:00pm through December 22nd, except on Mondays and Tuesdays. Though admission is free, there is a small charge for some activities and the food items in the Hot Chocolate Shop.

For more information about Winter Wonderland or the Clearwater Community Volunteers, please visit www.ccvfl.org or call the CCV Center at (727) 316-5309.

Clearwater Community Volunteers (CCV) is a non-profit, charitable organization made up entirely of volunteers and was founded by parishioners of the Church of Scientology in Clearwater. CCV produces the “Ginormous Easter Egg Hunt” in Coachman Park in Clearwater every spring, Fashions with Flair fundraiser fashion show and Winter Wonderland. CCV gets their inspiration from Scientology Founder L. Ron Hubbard’s article, “Love and Help Children” in his book The Way to Happiness. CCV has raised hundreds of thousands of dollars over the past 25 years for charities such as Nourish to Flourish, Shriners Hospitals for Children Tampa, Boys and Girls Club of the Suncoast, Homeless Empowerment Program, the Make-A-Wish Foundation, the Police Athletic League and The Children's Home, Inc., the oldest orphanage in Tampa.