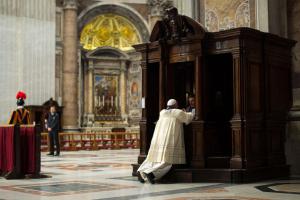 Confession at the Vatican 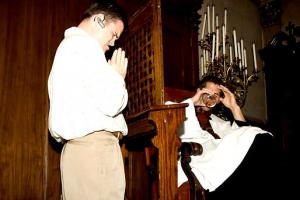 The Catholic Church has systematically covered up abuse of children and vulnerable adults for years. The statute of limitations has long past for many victims.

The Roman Catholic Church can no longer insist on its moral authority because it is has become an institution controlled by men who are intrinsically immoral. We are watching its demise in real time.”
— G.R. Pafumi

SPRING VALLEY, NEW YORK, UNITED STATES, December 18, 2018 /EINPresswire.com/ — The Catholic Church has systematically covered up sexual abuse of children and vulnerable adults for decades. For a substantial number of victims, the statute of limitations (SOL) has long past for them to file a claim and receive restitution for their pain and suffering. Historically, victims have been reluctant to come forward. But this has changed with the vastly increased public awareness of child abuse. Now victims are coming forward en masse, driven by such events as reporting by The Boston Globe’s Spotlight team in 2002 and the 2018 Grand Jury report in Pennsylvania. There is a growing need for retroactive legislation (a look-back period) which will allow victims a limited time to file claims and receive restitution for past abuse. Some of the victims were octogenarians when they first came forward. The Catholic Church actively opposes such look-back legislation. Thus far, nine states have enacted retroactive legislation. The results speak for themselves. California enacted look-back legislation in 2002. More than 1,000 victims came forward. Abuse by Catholic clergy accounted for 850 of those victims.

VictimsSpeakDB.org has compiled a database of nearly 7,000 persons who were abused (as children in most cases) by more than 3,600 Catholic clergy. The data shows that abuse by Catholic clergy has substantially declined since the 1980s. However, the disclosure of that abuse has become a 21st century phenomenon, triggered initially by The Boston Globe’s Spotlight Team in 2002. In early 2018, Pope Francis accused abuse victims in Chile of calumny. The victims accused an archbishop of covering up for the worst clergy offender in Chilean history. In August 2018, a Pennsylvania Grand Jury found that over 300 priests abused more than 1,000 children over the last half-century. The Church’s administration, its bishops and cardinals, is now under attack internationally for shielding sex offenders of minors and vulnerable adults.

The single year 2002 accounts for more accusations of abuse than any other period, surpassing accusations made between 1990 and 1993 by 50%, the second highest period in the database. The average victim's last year of abuse was between 1980 and 1985. However, the average age those victims who first reported their abuse has risen steadily from 15 years old to 50 years old between 1980 and 2018. As the number of victims reporting abuse escalated in the 1990s, and thereafter, the average age of the victims has increased steadily and simultaneously. The data indicates that most of the abuse occurred prior to 1990, beyond the statute of limitations (SOL) in many states. Many victims will never get justice unless the SOL is extended retroactively, giving historic victims a chance to obtain justice, restitution and closure. The Church know this, which is why it actively and aggressively opposes look-back legislation while not opposing expanding the SOL for current and future offenses.

According to the SACCADAS (Survivor Accounts of Catholic Clergy Abuse, Denial, Accountability, and Silence) database, used as the source material for the VictimsSpeakDB.org website, the peak year for the last incident of abuse was 1979. This year is the peak for both total victims and male victims (males account for 81% of the victims). Female abuse peaked in 1969, a decade earlier. Based on the last incident of abuse, not the year it was first reported, the typical age of the victims when they first reported their abuse declined from more than 40 years old in 1973, to under 30 years old beginning in 1985. The average number of years it took victims to come forward, based on the last incidents of abuse, fell from more than 30 years in 1972, to less than 20 years beginning in 1981, less than a decade later. The data strongly suggests that as time progresses, victims take much less time to report their abuse and that they report the abuse at younger and younger ages.

Because so much of the reporting of abuse is event driven, the year 2002 for first report dominates the distribution. The years 2016-2017 also show a spike in reporting as the state of Minnesota and the territory of Guam enacted look-back legislation. The typical year of first report for victims whose last incident was between 1940 and 1995 was the year 2000 or 2001. By 1996, the average year jumps to 2002 and continues to increase. By 2005, the average year to first report was 2010, suggesting that victims are reporting their abuse more quickly in the 21st century as compared with the 20th century. This data provides additional evidence that expansion of the SOL is necessary for many victims of abuse years or decades earlier. The Catholic Church does not seem to oppose expanding the SOL because most of the more recent victims are reporting their abuse within the time limits of the current SOLs that are already in place.

As many as 45 states have asked for assistance from Pennsylvania authorities in their investigations of clergy sex offenders. Some states have set up hotlines for victims. Over 1,450 calls have been received by the Pennsylvania hotline with many of the contacts providing information not previously known to state investigators. A major problem with ongoing state reviews is that much of the abuse now being discovered occurred so long ago that existing time restrictions on charging such crimes have either expired or the suspect priests have died. Only two of the 300 priests identified in the Pennsylvania grand jury report involved abuse allegations that occurred within current SOL limitation restrictions. This reality points to the same conclusion. Retroactive legislation is necessary for a significant number of historic victims to obtain justice, restitution, and closure.