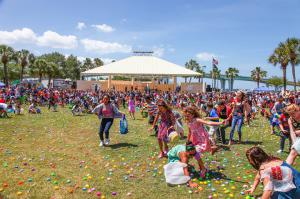 Approximately 8000 guests participated in last year’s Easter Egg Hunt in Coachman Park. The event is open to the community, providing family fun for all to enjoy. This year’s event will be held on Sunday April 21st.

What started as a small event with a few hundred people is now a huge event with thousands of children running to get as much candy as possible,”
— Pam Ryan-Anderson, Exec. Dir. of the Clearwater Community Volunteers

CLEARWATER, FLORIDA, US, March 28, 2019 /EINPresswire.com/ — On April 21 thousands of children and families will be in attendance at the 27th Annual Ginormous Easter Egg Hunt in Coachman Park in downtown Clearwater. Produced by the Clearwater Community Volunteers (CCV) and sponsored by the Church of Scientology, the annual hunt also includes pony rides, a petting zoo, face painting, train rides, gyroscope and bouncy houses. The hunt itself is free, and the small fees collected for the attractions are donated back to community charities.

“The hunt happens exactly at 12:30 sharp and is over in minutes, so be sure to be there early!” said Pam Ryan-Anderson, Executive Director of the Clearwater Community Volunteers. “What started as a small event with a few hundred people is now a huge event with thousands of children running to get as much candy as possible, and maybe discover a golden egg to win a stuffed Easter bunny.”

In addition to other attractions at the event, the Easter Bunny and his companion will be taking photos with families. Food will also be available for purchase. The event will run until 2pm.

Ample free parking is available in the parking lot to the south of Coachman Park.

“Scientology founder L. Ron Hubbard wrote in the Way to Happiness that one should ‘Love and help children’, which is what we do through our events,” said Ms. Anderson. “Since 1993, the Clearwater Community Volunteers has had the purpose of helping to create a better community for all citizens of Clearwater and Pinellas County. The Easter Egg Hunt is one of four signature CCV events uses to raise the funds needed to support children through organizations like the Sheriff’s Police Athletics League and the Children’s Home Network.”

To find out more information about the Clearwater Community Volunteers or the Ginormous Easter Egg Hunt in Coachman Park please call (727) 442-2099 or email ccvdirector@ccvfl.org.

About the Clearwater Community Volunteers:
The Clearwater Community Volunteers have over 25 years of community service under their belt with over 150,000 families and children helped since their founding in 1992. Sponsored by the Church of Scientology Flag Service Organization, they stay true to their reputation of helping others with their new center located on the corner of Fort Harrison Avenue and Drew Street in downtown Clearwater.