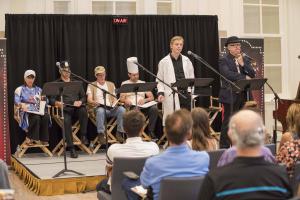 L. Ron Hubbard East Coast theatre performing at the Scientology Information Center in downtown Clearwater. The theatre’s next performance of “Calling Squad Cars” will be on 13 April starting 6:30 pm.

Radio theatre is a form of dramatic entertainment that in its heyday brought family and friends together around the radio to share in thrilling adventures, raucous comedies, and compelling mysteries.”
— Amber Skjelset, Manager of the Scientology Information Center

CLEARWATER, FLORIDA, US, April 1, 2019 /EINPresswire.com/ — On Saturday, April 13th starting at 6:30 pm, the L. Ron Hubbard East Coast Theatre will perform, Calling Squad Cars, a detective/ mystery story by Mr. Hubbard. The performance will take place at the Scientology Information Center at 500 Cleveland Street in Downtown Clearwater and is open to the community. Light refreshments will be served. Ms. Joanie Sigal, the show’s producer, will open up the event with songs from the 1930s and ‘40s, bringing the era to life.

Calling Squad Cars, written in 1934, is about a police dispatcher who is jailed for allegedly helping a vicious gang of criminals. After making bail, he comes up with a daring plan involving the use of stolen radio equipment in an effort to clear his name. While Calling Squad Cars is a fictional story, L. Ron Hubbard used his own real-life experiences as a special officer in the Los Angeles Police Department, from 1947 to 1949, to create an authentic foundation for his detective fiction.

“Radio theatre has a rich and storied tradition that developed in the 1920s and grew in popularity over the next several decades,” said Ms. Amber Skjelset, Manager of the Scientology Info Center. “Radio theatre is a form of dramatic entertainment that in its heyday brought family and friends together around the radio to share in thrilling adventures, raucous comedies, and compelling mysteries. Millions of listeners tuned in to listen to the broadcasts, featuring the top actors of the time.”

L. Ron Hubbard was among the most prolific and popular writers of the Golden Age of Pulp Fiction. Between 1934 and 1940, some 140 L. Ron Hubbard tales appeared on the pages of legendary pulp magazines—with as many as three titles an issue bylined under more than a dozen of L. Ron Hubbard’s pen names. With 19 New York Times bestsellers and more than 350 million copies of his works in circulation, Mr. Hubbard is among the most acclaimed and widely read authors of our time.

For more information about the troupe’s next performance at the Information Center, please contact Amber Skjelset at (727) 467-6966 or email amber@cos.flag.org. The Scientology Information Center is open daily from 10 am to 10 pm.

The Scientology Information Center, located in the century-old Clearwater Building in downtown Clearwater, opened on July 11, 2015, and currently houses a gallery of audiovisual displays with some 400 videos. The Center is open to all and provides a self-guided tour showing basic Scientology beliefs, Churches around the world, ongoing social programs and the life of L. Ron Hubbard, Scientology's founder. The Center offers tours to the broad public and civic leaders; holds concerts, theatrical performances, and receptions for the community; and opens up the use of its conference room to social, civic and non-profit groups.