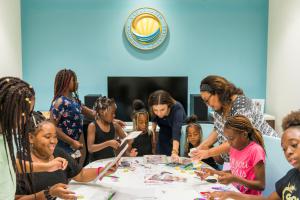 …we took a different angle, taking out the practical jokes and keeping the fun.”
— Michael Soltero, CCV Center Manager

CLEARWATER, FLORIDA, US, April 3, 2019 /EINPresswire.com/ — On March 31st, the Clearwater Community Volunteers (CCV) held a no-cost and fun-filled celebration of April Fools’ Day, without the conventional mischief, for Clearwater families at the CCV Center in downtown Clearwater. The event began with a catered reception of kid-friendly foods such as chicken nuggets, pizza and chicken Caesar salad, along with desserts like apple fritters and cookies. Tables were set up with children’s activities where kids carried out arts and crafts projects. A contest was also held in which children popped balloons some of which contained tickets they could redeem for prizes.

“April Fools’ Day has been celebrated for several centuries by different cultures,” said Michael Soltero of the CCV Center. “In the 1500’s, New Year’s Day was celebrated on April 1st, however when France switched its calendar to the Gregorian calendar, New Year’s Day was moved to January 1st. Some people did not get the memo and were teased for not knowing. Well we took a different angle, taking out the practical jokes and keeping the fun.”

After getting their tickets from the balloons, families went to The Way to Happiness Center, a block away, to be awarded their prizes. There guests were introduced to the Way to Happiness, written by humanitarian and Scientology Founder L. Ron Hubbard.

When asked about the event one parent said, “My family had so much fun at the CCV Center. We had no idea CCV was doing so much for the community from that building.”

Attendees were also invited to CCV’s Annual Ginormous Easter Egg Hunt in Coachman Park, which is being held this year on Sunday April 21st.

To find out more information about the Clearwater Community Volunteers Center or to attend or volunteer for the Ginormous Easter egg hunt in Coachman Park, please call Clemence Chevrot at (727) 316-5309 or email ccvdirector@ccvfl.org.

The Clearwater Community Volunteers have over 25 years of community service under their belt with over 150,000 families and children helped since their founding in 1992. Sponsored by the Church of Scientology Flag Service Organization, they stay true to their reputation of helping others with their new center located on the corner of Fort Harrison Avenue and Drew Street in downtown Clearwater.