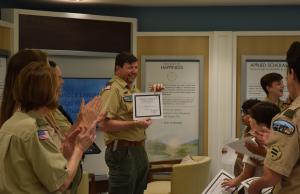 Chris Lumsden, Scoutmaster of Troop 313 of the Boy Scouts of America, was presented with the Scoutmaster of the year award on April 6th at the Clearwater Community Center in downtown Clearwater. Here Mr. Lumsden proudly shows the Troop their award for their hard work.

The Boy Scouts program seeks to teach boys positive moral values and skills that they will carry with them throughout their life.”
— Michael Soltero, CCV Center Manager

CLEARWATER, FL, US, April 11, 2019 /EINPresswire.com/ — On April 6th, Chris Lumsden, Scoutmaster of Boy Scouts Troop 313 was awarded Scout Master of the Year by the Miccosukee District of the Boy Scouts Greater Tampa Bay Council. The award, reserved for those Scoutmasters who demonstrate the highest level of dedication and leadership to their troop, was presented to him at his Troop’s weekly meeting at the Clearwater Community Volunteers (CCV) Center in downtown Clearwater.

Mr. Lumsden said, “I'm honored to receive this award. Working with the boys is very rewarding and a lot of fun. Over the years I’ve seen one of my sons become an Eagle Scout at 14 and the other is about to achieve the same. They, like other boys in the program, grew into responsible leaders in their community through Scouting.”

First serving the troop as assistant Scoutmaster, Mr. Lumsden became the Troop 313 Scoutmaster in 2017 and has since helped the boys of his troop earn merit badges on their way through the ranks to Eagle Scout. During his tenure as Scoutmaster he has obtained the Wood Badge to better help those Scouts under his care whether they be a member of his troop or not.

“The Boy Scouts program seeks to teach boys positive moral values and skills that they will carry with them throughout their life.” said Michael Soltero, Manager of the CCV Center. “Scientology Founder, L. Ron Hubbard, agreed when he said, ‘Of all the information which became important to me, such as photography, woodlore, signaling, and many other subjects, the basics of it was laid in Scouting.’”

Troop 313 has been meeting in the Clearwater Community Volunteers Center since its opening one year ago. The center provides its facilities to the troop at no-cost to further the troop’s community outreach. The troop is open to boys of any faith, as is any troop. Boys in the Scouting program and encouraged to be faithful and loyal, as laid out in the Scout Oath and Law.

The Miccosukee District serves all units from 54th Avenue North in Pinellas County and northward to the Pinellas/Pasco County line.

For more information about the Clearwater Community Volunteers Center or the Boys Scouts Troop 313 please call Michael Soltero at (727) 316-5309 or email ccvcenter@ccvfl.org.

The Clearwater Community Volunteers have over 25 years of community service under their belt with over 150,000 families and children helped since their founding in 1992. Sponsored by the Church of Scientology Flag Service Organization, they stay true to their reputation of helping others with their new center located on the corner of Fort Harrison Avenue and Drew Street in downtown Clearwater.