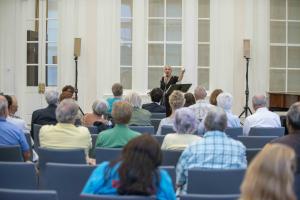 Joanie's performance took my breath away. It feels as if I were watching this on Broadway.”
— Michelle Hod, Clearwater Resident

The spring concert brought music lovers together in celebration of the season. Ms. Sigal performed songs from well-known musicals, including Phantom of the Opera, Wicked, Greatest Showman as well as jazz, and timeless songs including Time to say goodbye made famous by Andrea Bocelli and Sara Brightman. Her performance garnered several standing ovations and requests for future concert dates.

Michelle Hod, Clearwater resident, commented, “Joanie's performance took my breath away. It feels as if I were watching this on Broadway”, while another stated “Joanie has energy that’s up to the roof on the Richter scale! This really made my day.” And yet another said “This was a great way to spend an evening! It was inspiring.”

Ms. Sigal has been singing since she was 4. In 1997 she brought these gifts to the Tampa Bay area at her debut performance at the Clearwater Building, which started her successful part-time singing career.

“The Information Center is a great place to celebrate artists who live right here in our community,” said Amber Skjelset, the Center’s Manager and event’s organizer. “Humanitarian and Scientology founder, L. Ron Hubbard wrote that ‘A culture is only as great as its dreams, and its dreams are dreamed by artists.’ Joanie is a wonderful artist and we are happy that she shares her talent with us.”

In addition to hosting regular concerts, theatrical performances and receptions for the community, the Scientology Information Center houses a permanent exhibit with interactive audio/visual displays and panels providing a self-guided tour highlighting basic Scientology beliefs, Churches around the world, ongoing social programs and the life of L. Ron Hubbard, Scientology’s founder. The Center also opens up the use of its conference room to social, civic and non-profit groups.

Fulfilling popular demand, Ms. Sigal will be performing again at the Information Center in honor of Memorial Day on Sunday May 26th from 6:30-8:30pm.

To learn more about this upcoming event or for more information about the Scientology Information Center please contact Ms. Amber Skjelset, at 727-467-6966 or e-mail her at amber@cos.flag.org. The center is open daily from 10am-10pm and requires no appointment to visit.

The Scientology Information Center, located in the century-old Clearwater Building in downtown Clearwater, opened on July 11, 2015, and currently houses a gallery of audiovisual displays with some 400 videos. The Center is open to all and provides a self-guided tour showing basic Scientology beliefs, Churches around the world, ongoing social programs and the life of L. Ron Hubbard, Scientology’s founder. The Center offers tours; hosts concerts, theatrical performances and receptions; and use of its conference room is open to social, civic and non-profit groups.