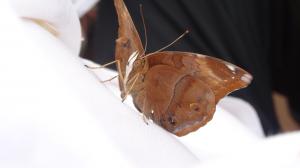 JAKARTA, INDONESIA, May 13, 2019 /EINPresswire.com/ — We found Mr Butter just over two weeks ago. He had recently hatched and for some reason had fallen to the floor. As his wings had not properly dried they were damaged and he could not fly, so he was a butterfly with no ability to fly, hence we called him Mr Butter.

Mr Butter was an Autumn Leaf or more precisely Doleschallia bisaltide. On the day we found him he gripped my husband’s proffered forefinger and then clung to his shirt all the way home looking like a brooch.

Once we arrived home we put him on some Lantana flowers which we had sprayed with a fine mist of sugar water and he soon started extending his proboscis deep into the flowers. When night came we brought him inside where we had made a miniature butterfly garden for him to spend the night complete with flowers, twigs, leaves and sugar water. The cold air and darkness induced his somnolence.

Each day when it warmed up I took him outside for a feeding session although I had to remain vigilant as a large predatory black slim waisted wasp sometimes cruised around looking for food for its young grubs.
Each evening when my husband came home he went straight to look at Mr Butter and ask if he had eaten that day. If not he would take him out for an evening meal.

The problem we faced was that he frequently fell onto his back and could not right himself. Butterflies do not crawl from one flower to another, they have to fly or hop. Each time he tried to do that he fell to the ground on his back and would flap his wings in a panic until one of us rescued him with a finger to cling on. With each panic session he lost some scales and even pieces of his wings as well as the fine hairs on his head and after a week the wings became very transparent and were in a sorry state.

Feeding in the second week became more difficult but we persevered even if it meant waiting for an hour for him to scent the sugar water and suck from the flower. An experiment to put a tiny tray of sugar water made out of a plastic bottle top as recommended by web sites on caring for sick butterflies did not work as he panicked and almost drowned. I sent an urgent text to my husband asking what I should do and he recommended bathing in clean water which worked. After the bath I took him to a sunny spot on the balcony where he revived.

Mr Butter died on Saturday lunchtime precisely two weeks after we found him which happens to the the expected life time of his species. The last three days were very trying as he lost control over his muscles and could not uncoil his proboscis to take the food we offered.

In the afternoon after he died when my husband went into the garden a Great Mormon (Papilio Memnon Agenor) its black wings giving the appearance of mourning uncannily and solemnly glided around him for the entire length of the footpath.

Why did we do all this? If we had not picked him up this butterfly he would have died a miserable death on the ground food for some bird or wasp or eaten by ants. As it was even though he could not fly, as our guest he enjoyed two weeks of sunshine, nectar and sugar water with somebody always ready to rescue him when he fell incapable onto his back.

There are a million tiny lives out there and caring for what God has created is always a beautiful and rewarding experience.