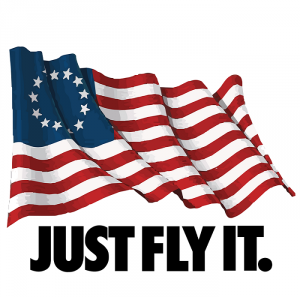 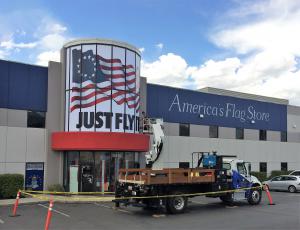 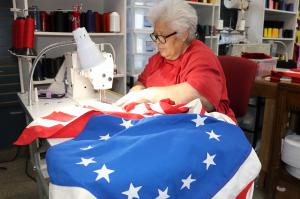 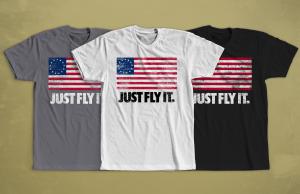 Let the Stars and Stripes stand above politics and fly proudly to symbolize that which unites us.”
— John Hartvigsen

• The Betsy Ross Flag belongs to all Americans, not to any faction or hate group. If you feel that this flag has
been co-opted, the message is simple: Take it back by displaying it proudly.

• As part of an effort to claim all of America’s historic flags, including the Betsy Ross Flag for all Americans,
Colonial Flag Company is sharing a historical perspective from renowned flag expert John Hartvigsen.

• Colonial Flag is introducing a “Just Fly It.” campaign to promote the concept.

Here it is July and we encounter yet a new flag controversy. The right to protest is one of the rights that the United States Flag symbolizes. However, on Independence Day, there are deeper issues that we may consider. Is the attack on the Betsy Ross flag warranted because at its founding slavery was practiced in the new United States? More concerning, perhaps, is the charge that the flag has been co-opted by hate groups, hence its display should be avoided.

Colonial Flag Company argues that United States flags, and all of its historic predecessors, are the great symbols of our shared histories, values and aspirations and of a pure and lofty vision

Eminent flag historian, Dr. Whitney Smith, noted that while the United States of America does not have a monarch who stands above politics, the United States flag fills the role of being above politics. It is not the flag of party or faction or issue but the symbol that represents our shared history, traditions, aspirations and values as a people.

When the Second Continental Congress declared American independence in July of 1776, we changed from being colonies of a kingdom to become a republic. The word republic comes from a Latin root phrase res publica which loosely translates as “in the matter of the public.” A republic is thus a form of government where the authority to govern flows not from a monarch but from the governed. When the Founders prepared the U.S. Constitution, the preamble began with the words, “We the people,” which made clear that governing power begins with the American people.

However, constitutional monarchies such as the United Kingdom have some advantages: one being that the king or queen stands above politics. Britain’s Head of State, Queen Elizabeth II, recently welcomed U.S. President Donald Trump for a state visit as she has done for countless other heads of states during her 67 years on the throne. Being above politics, she entertains each leader—whether president, dictator or king—representing the British nation but not any political party, faction or issue.

The U.S. Head of State—whether Reagan, Clinton or Trump—carries political baggage springing from their roles as political leaders. So, protestors may have gathered for Trump’s visit to London, but the British Head of State filled her role flawlessly.

Controversy has swirled as athletes have knelt rather than standing to honor the flag and the National Anthem. A few years ago, politicians came under attack if they failed to wear flag lapel pins, and the current president is known for exaggeratedly hugging the flag at political rallies.

Now Nike has stopped plans to release sneakers featuring a 13-Star U.S. flag embroidered above the heel at the back of the shoes. This brought about by a protest from Colin Kaepernick, a former San Francisco 49er’s quarterback turned activist, that the original U.S. flag should not be depicted since slavery existed in the United States when the nation was formed.

Others may have protested that according to the U.S. Flag Code the flag should not be placed on clothing, and certainly a shoe may not be the best place to embroider a flag. However, the sneaker design was tastefully done, and Nike’s intention would have been to honor the flag and the nation.

Kaepernick certainly has a right to his opinion. No nation, not just the United States, has been or is perfect. It is through striving to achieve the founding ideals symbolized in the flag, over many years, through all the challenges that mark a nation’s history, that we define the flag. The Declaration of Independence declared that “all men are created equal,” but it took decades and a bloody Civil War to end slavery.

Americans may be saddened that Nike would bow to such an argument. Those who do not choose to wear Nike Air Max 1 Quick Strike Fourth of July shoes, for whatever reason, have the freedom to not purchase or wear them; that is one of the freedoms represented by the U.S. flag . However, others resent Nike’s decision based on the overwhelming positive sacrifices and collective history that represent the good in Americans as a whole.

The Betsy Ross Flag belongs to all Americans, not to any faction or hate group. If you feel that that this flag has been co-opted, the message is simple: Take it back by displaying it proudly!

As part of an effort to claim all of America’s historic flags, including the Betsy Ross Flag, for all Americans, Colonial Flag Company has produced bumper stickers and t-shirts promoting the concept bearing the simple message, “Just Fly It.”

Let the Stars and Stripes stand above politics and fly proudly to symbolize that which unites us.