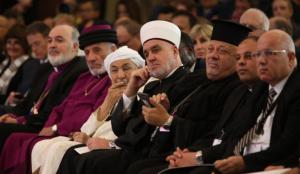 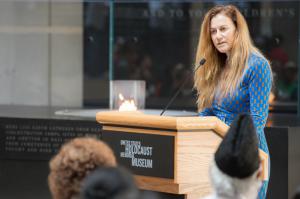 Naomi Kikoler, Acting Director of the Simon-Skjodt Center for Prevention of Genocide.jpg 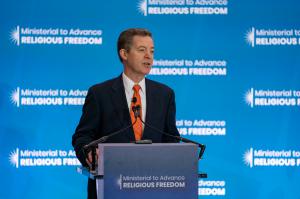 The Religious Freedom Roundtable format is a winner. It deserves to be replicated throughout the world.”
— T. Riggs Eckelberry

WASHINGTON, DC, USA, August 1, 2019 /EINPresswire.com/ — Last year, I wrote: “International religious freedom blossomed in 1998. It fell into disuse after 9/11. Its renaissance… came with a recognition that it is a vital tool to promote the security of nations and peoples.”
And in 2018, the first-ever Ministerial to Advance Religious Freedom helped signal this renaissance.
Held from 16 to 18 July in Washington, D.C., this year’s Ministerial to Advance Religious Freedom took up the cause of the many attacked religious minorities.

It was a big event. On its final day, one participant reported: “Close to 900 members of civil society and religious groups attended. By my count, we had 36 panels and 186 speakers over those two days (give or take a few). Over 100 governments coming today!”

According to Vice President Mike Pence, the final number was 106.

In his keynote address, Secretary of State Mike Pompeo said, “Today we are turning our convictions into action. And there’s not a moment to lose. A shocking 83 percent of the world’s population live in nations where religious freedom is either threatened or denied entirely.”

He added, “We will create the International Religious Freedom Alliance. We hope that this new vehicle—the first ever international body devoted to this specific topic—will build on efforts to date and bring likeminded countries together to confront challenges of international religious freedom.

“It will provide a space for the work that we do here to flourish throughout the year. And importantly, it will defend the unalienable rights for all human beings to believe—or not to believe—whatever it is they choose. We’re eager to discuss this new initiative with you and to work with you and to build it out.”

The Religious Freedom Roundtable format is a winner. It deserves to be replicated throughout the world.
Secretary Pompeo concluded with some of his office’s concrete wins of the past year: “Last year at this ministerial, I told this audience that we were working to bring home Pastor Brunson, who was unjustly held in Turkey for more than two years. This year, hallelujah, our prayers have been answered, and he’s with us here today.”

The U.S. is devoting solid resources to the cause of International Religious Freedom. And this year’s Ministerial itself is evidence of growing international participation. The problem is, governments alone are powerless to stem the tide of religious oppression.

One solution? Grassroots organization. It’s time for all “to begin forming ‘religious freedom roundtables’ in their own communities and hosting discussions between religious leaders on ways to protect freedom of religion for everyone,” said U.S. Ambassador-at-Large for International Religious Freedom Sam Brownback.

The model for these roundtables is the International Religious Freedom Roundtable (IFR), a civil society coalition working specifically to help faiths in need around the world.

Naomi Kikoler, Acting Director of the Simon-Skjodt Center for Prevention of Genocide, delivers remarks at the Ministerial’s first gathering on July 15, held at the U.S. Holocaust Memorial Museum in Washington, D.C.

Launched ten years after 9/11, it’s a true bipartisan coalition of dozens of faith organizations and other nonprofit supporters of religious freedom, and Ambassador Brownback became its facilitator soon after he assumed office in 2017.

Roundtable meetings have an agenda, and anyone can speak. Details of violations of religious freedom are brought to the attention of Ambassador Brownback and his staff, and suggestions are taken up on how to address these.

This is no talk-fest. The State Department is highly responsive to Roundtable concerns, as Institute on Religion & Democracy intern Ryan Brown attested:

“At the first IRF Roundtable meeting that I attended, a woman came forth and informed the Ambassador that several members of her church had gone missing while on a mission trip to an East African nation. She believed that those missing had been detained and imprisoned by local police. After explaining more of the specific details to Brownback, the woman asked the ambassador if there was anything he could do to help the members of her church return home safely. Brownback informed her that he would get in contact with the local embassy immediately and that he would try to bring the members of her church home.

“At the second IRF Roundtable meeting I attended, which took place only seven days after the first, Brownback announced that those members of the woman’s church had, in fact, been detained and imprisoned, but that they had been freed and returned home safely to the United States. All of that, in less than a week! It is this sort of heroic work that takes place behind the scenes in Washington, D.C., that few Americans know about or appreciate.”

Given the leverage of social media, these brave witnesses create viral outrage and action. They are a vital engine supporting the efforts of governments and NGOs alike.

The Religious Freedom Roundtable format is a winner. It deserves to be replicated throughout the world.
But there’s another major offensive weapon for freedom of belief: the voices that tell stories that cannot be killed.

These stories fill the Twitter feed for #IRFMinisterial. Here are just a few:

Jewher Ilham, whose father’s exercise of free speech, his intellectual defense of Religious Freedom, his fight for the Uyghurs to be treated equally could not be tolerated. Now he’s serving a life sentence in prison.

Abdul Shukoor “spent 3 years and 3 months in a prison in Pakistan, at age 81, tried and convicted as a ‘terrorist’ because he was an Ahmadi Muslim who sold books—but today, Abdul Shukoor stands as a guest of the U.S. Government, a model of courage, resilience & steadfastness.” Mr. Shukoor met with the President of the United States along with other victims of religious terror.

Nadia Murad, 2018 Nobel Peace Prize Laureate, and a survivor of the Yazidi genocide in Iraq, spoke on the continuing struggle to reintegrate the Yazidi and other persecuted minorities into Iraqi society.
Given the leverage of social media, these brave witnesses create viral outrage and action. They are a vital engine supporting the efforts of governments and NGOs alike.

So many stories. And to cover them, the IRF helped coordinate a slate of nearly 100 side events.
Topics included:

• “Silicon Valley and China: The Rise of Religious Oppression Through Technology,”
• “Nigeria: “This Genocide is Loading,” and
• “Uyghurs: Oppression for the Sake of Progression in China.”

Many of these side events took place at the Second Stage held at George Washington University’s Marvin Center.
The inevitable conclusion is that freedom of religious belief is under such pressure that it must be fought in all possible arenas: government, NGOs, religious organizations, the planned regional roundtables, and the brave voices that create the outrage needed to break through even the most repressive intolerance.
All of these found a home at the 2019 Ministerial for Religious Freedom.

To find out more about human rights and the importance of respecting individual rights, including religious freedom go to the United for Human Rights website www.humanrights.com.

T. Riggs Eckelberry
When I was growing up, we lived everywhere, and to this day I can number my friends from school on one hand. I have served as a commercial ship captain, wine importer, film production manager, and above all, technologist. Today, I’m the CEO of a public company that licenses a unique technology for treating water. I believe that technology has the potential to save the world, but also to undermine our rights and our independence. The many people working in the spiritual arena are the vital counter-balance, and I’m proud to be one of these, with my wife, Sigrid.

What are human rights