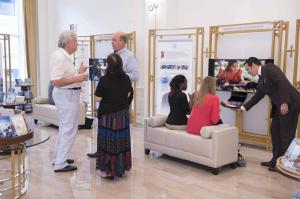 CLEARWATER, FLORIDA, US, August 1, 2019 /EINPresswire.com/ — This week, the staff of the Scientology Information Center announced the results of their survey of some 3,000 visitors. The upshot? There are many facts that visitors are surprised to learn when they spend time in the Downtown Clearwater center.

“Most of our visitors to the Scientology Information Center are tourists and people new to the area,” said Amber Skjelset, the Manager of the Center. “We also want to reach out to locals who have lived here awhile who want to find out for themselves what Scientology is all about.”

“Statistics show that Clearwater’s beaches bring tourists by the hundreds who have voted it the best beach for the 2nd year in a row,” said Ms. Skjelset.

“But, did you know one of the highest-visited spots in Downtown Clearwater is the Scientology Information Center?”

“Some guests are curious about Scientology’s principles or want to know more about the uniformed Church staff, and they find answers to those questions at the Information Center. Following our survey, and in talking to visitors, I found out what five facts most guests were surprised to learn about.”

At a glance, here are the top 5 things that visitors can learn at the Center:

1. The Scientology Information Center is located in the restored Century-Old historic Clearwater Building, one of Clearwater’s oldest buildings.

2. Learn which well-known Hollywood screen-actor and heart throb of his day rehearsed his lines and honed his acting skill with his close friend L. Ron Hubbard, founder of Scientology.

3. The religious structure that inspired the Church of Scientology’s 8-point-sunburst cross and what is its significance in Scientology.

4. The middle-eastern city which has a center for Scientology that brings together members of often warring religions and helps inspire peace and understanding between these faith systems.

5. Learn what Scientology landmark sites, that still exist today, were once the homes of L. Ron Hubbard and from which Scientology’s history of expansion began.

The Scientology Information Center is open daily from 10am-10pm. No appointment is necessary. All are welcome.

For more information about the Scientology information, please contact Amber Skjelset, 727-467-6966 or e-mail her at amber@cos.flag.org.