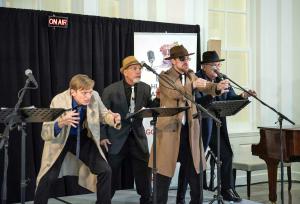 The L. Ron Hubbard East Coast Theatre performing the science-fiction story, “The Dangerous Dimension”. Their upcoming performance, “The Professor Was a Thief” will take place on August 24, 2019, starting 6:30pm at the Scientology Information Center.

Attend the Radio Theatre Production of “The Professor Was A Thief” by L. Ron Hubbard

If you like unique entertainment and enjoy the ‘old-time radio show’ flair, you’re in for a treat!”
— Amber Skjelset, manager Scientology Info Center

CLEARWATER, FLORIDA, USA, August 22, 2019 /EINPresswire.com/ — The talented L. Ron Hubbard East Coast Theatre will deliver an old-time radio-style performance of the adrenaline-fueled sci-fi story, The Professor Was a Thief. It will be held at the Scientology Information Center 500 Cleveland Street, downtown Clearwater, on Saturday, August 24th starting at 6:30 pm. There is no cost to attend and light refreshments will be served.

In the story, The Professor Was a Thief, famous landmarks across New York City are disappearing. The Empire State Building has vanished into thin air. Gone, too, are Grant’s Tomb and Grand Central Station. No one seems to have the answers, and hysteria is breaking out across the city. It’s up to a grizzled old newspaper reporter known as “Pop” to get to the bottom of the vanishing buildings, before the entire city disappears, along with his job. The story was first published in the February 1940 issue of Astounding Science Fiction magazine.

While The Professor was a Thief is a fictional story, L. Ron Hubbard was no stranger to the hustle and bustle of New York City. As a matter of fact, between 1934 and 1936, Mr. Hubbard lived in a Greenwich Village basement apartment as a professional writer, just over 10 miles away from the famous landmarks he mentions in the story. Often called by the locals, “The Village,” was an artists' haven and the "Bohemian capital” for many decades.

“This is the theatre’s second sci-fi story performance at the Information Center,” said Amber Skjelset, the center’s manager. “If you like unique entertainment and enjoy the ‘old-time radio show’ flair, you’re in for a treat!”

All are welcome but seating is limited. To reserve seats or to learn more about the event, contact Amber Skjelset, Manager of the Scientology Information Center at 727-467-6966 or amber@cos.flag.org.

L. Ron Hubbard was among the most prolific and popular writers of the 20th century. Indeed, between 1934 and 1940, some 140 L. Ron Hubbard tales appeared in the pages of legendary pulp magazines—often as many as three titles an issue and bylined under some fifteen pen names. With 19 New York Times bestsellers and more than 350 million copies of his works in circulation, Mr. Hubbard is among the most acclaimed and widely read authors of our time.

The Scientology Information Center, located in the Historic Clearwater Building in downtown Clearwater, opened on July 11, 2015, and currently houses a gallery of audiovisual displays with some 400 videos. The Center is open to all and provides a self-guided tour showing basic Scientology beliefs, Churches around the world, ongoing social programs and the life of L. Ron Hubbard, Scientology's founder. The Center offers tours for the broad public and civic leaders; holds concerts, theatrical performances, and receptions for the community; and opens up the use of its conference room to social, civic and non-profit groups.