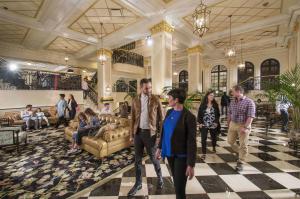 Monthly tours of the historic Fort Harrison, international religious retreat for the Church of Scientology, are available through the Scientology Information Center.

The Fort Harrison’s exterior is composed of ten inch thick concrete and each window is over an inch thick, fortifying the building against winds of up to 200 mph.”
— Amber Skjelset, manager Scientology Information Center

CLEARWATER, FLORIDA, US, September 5, 2019 /EINPresswire.com/ — Clearwater residents and out-of-state visitors gathered Saturday the 31st of August at the historic Fort Harrison for a tour of Clearwater’s iconic building, owned by the Church of Scientology Flag Service Organization.

One space in particular, the Crystal Ballroom, situated on the 10th floor of the Fort Harrison, seemed to make the biggest impression on the guests. The ballroom features a chandelier of 11,600 hand-cut and polished bohemian crystals weighing 400 lbs and illuminated by 52 individual lamps and an oval oak wood dance floor, framed by a panoramic view of the inter-coastal waterway.

Visitors learned about notable guests spanning the facility’s nine decades. In 1974, Vice President Gerald Ford spoke to 900 Republicans in the auditorium. The Philadelphia Phillies used to stay at the Fort Harrison during spring training. And World War II troops were billeted at the Fort Harrison.

“Another thing most visitors aren’t aware of is that the Fort Harrison, which underwent top-to-bottom restoration in 2009, served as a hurricane shelter in 2017 for Hurricane Irma,” said Amber Skjelset, the tour guide and manager of the Scientology Information Center. “The Fort Harrison’s exterior is composed of ten inch thick concrete and each window is over an inch thick, fortifying the building against winds of up to 200 mph.”

Guests also learned how the Church offers the Fort Harrison’s Crystal Ballroom and Auditorium for the community events of other non-profits. The Church also sponsors major outdoor events such as Winter Wonderland, the downtown Clearwater Block Parties and the Ginormous Easter Egg Hunt in Coachman Park.

The next Historical Building Tour is on September 28th. To RSVP, please contact Amber at 727-467-6966 or amber@cos.flag.org.

The Church of Scientology: