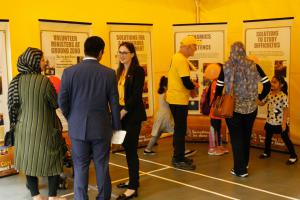 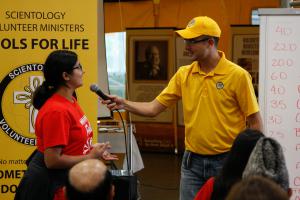 The Volunteer Ministers held seminars filled with lively discussions and tools that those attending took away with them to help resolve difficulties or improve their lives. 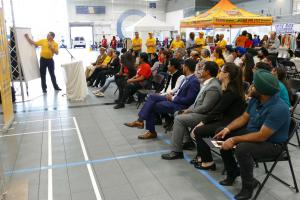 Seminars are based on the Scientology Handbook 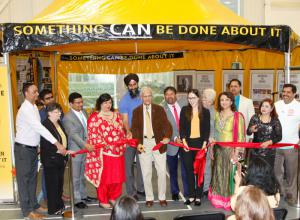 The Scientology Volunteer Ministers Canadian Cavalcade added a bright touch of yellow to the Multicultural Festival in Brampton, Ontario.

LOS ANGELES, CALIFORNIA, UNITED STATES, September 12, 2019 /EINPresswire.com/ — A kaleidoscope of colorful kimonos, saris and cheongsams and the music of a dozen cultures greeted the 1,450 visitors to the annual Greater Toronto Area Multicultural Festival, hosted this year in Brampton, Ontario. Scientology Volunteer Ministers, whose members hail from nearly every country on Earth, set up their Continental Cavalcade at the celebration in support of the festival’s message of diversity and peace.

Speakers from many backgrounds and faiths helped cut the ribbon signaling the opening of the Cavalcade and welcomed the volunteers, thanking them for their work to enrich the lives of the people of the city.

Brampton, one of the fastest-growing cities in Canada, has a unique distinction—the majority of its residents were born outside Canada. The city is a living example of Canada’s reputation as a cultural mosaic rather than a “melting pot.”

Visitors were invited to tour the pavilion and learn of the work of the Volunteer Ministers (VMs) in times of need—whether the need created by a hurricane or earthquake that devastated an entire region or that of a family in the throes of divorce or in turmoil over the drug addiction of a loved one.

One of the most popular Volunteer Minister services is Scientology assists. These are techniques developed by Mr. Hubbard that address the spiritual factors that precipitate accidents and illnesses and prolong suffering. Volunteer Ministers offered assists to the festivalgoers who were amazed to discover how much brighter and more energetic they felt and were startled to find nagging aches and pains simply disappear.

Scientology Volunteer Minister Continental Cavalcades travel to major centers of population while VM Goodwill Tours bring this technology and help to remote areas along the Amazon Basin, throughout Western and Central Africa, India, Siberia, South America, the Pacific Islands and the Outback of Australia.

As in Brampton, civic and religious leaders cut the ribbon to these Cavalcades and Goodwill Tours and facilitate the VMs’ sharing their training and skills with their communities.