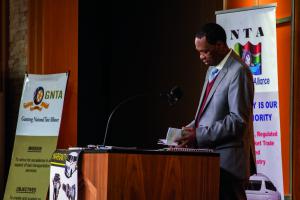 Taxi association leaders share the importance of adopting The Way to Happiness. 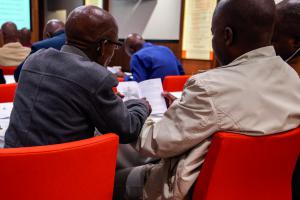 They studied the precepts of The Way to Happiness, sharing examples they have observed in their own lives. 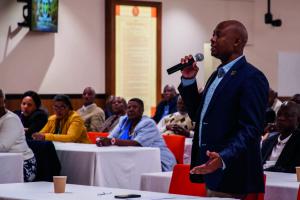 Members spoke of their personal concerns and their hope for this program. 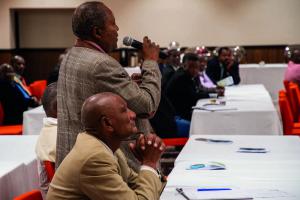 Adopting The Way to Happiness to take effective action against crime

With carjacking affecting their livelihoods and the safety of passengers, South African taxi drivers take matters into their own hands—in a very positive way.

LOS ANGELES, CALIFORNIA, UNITED STATES, September 14, 2019 /EINPresswire.com/ — In South Africa, where carjacking is at epidemic levels, being a taxi driver has become one of the country’s most dangerous professions.

Taxi drivers have decided to take matters into their own hands. Not by becoming vigilantes, but quite the reverse. They are attacking crime at its source by adopting The Way to Happiness, the common-sense guide to better living written by humanitarian and Scientology Founder L. Ron Hubbard.

They attended a special seminar on The Way to Happiness at the Church of Scientology Kyalami Castle where they took their first step by studying the booklet so they could better understand the significance of the work they were embarking on—bringing The Way to Happiness to the thousands of commuters who rely on their services in Gauteng Province of South Africa.

WHAT IS THE CAUSE OF CRIME?

After extensive research, Mr. Hubbard found that a being becomes a criminal when he or she loses his personal pride. “Rehabilitate that one point and you don’t have a criminal anymore,” he wrote.

The Way to Happiness is a way taxi drivers can tackle this crisis one person at a time—by handing out copies of the booklet. Used in anti-recidivism and criminal rehabilitation programs around the globe, The Way to Happiness enables anyone to review their own decisions and make positive change.

In studying this booklet, many men and women caught up in the criminal justice system say that when reading the epilogue, they felt as though Mr. Hubbard was speaking to them personally. What helped them turn their lives around was this concept:

“One can feel at times like a spinning leaf blown along a dirty street, one can feel like a grain of sand stuck in one place. But nobody has said that life was a calm and orderly thing: it isn’t. One isn’t a tattered leaf nor a grain of sand: one can, to greater or lesser degree draw his road map and follow it.

“One can feel that things are such now that it is much too late to do anything, that one’s past road is so messed up that there is no chance of drawing a future one that will be any different: there is always a point on the road when one can map a new one. And try to follow it. There is no person alive who cannot make a new beginning.”

According to Statistics SA in its National Household Travel Survey, taxis are the main source of transport for most households in South Africa at 41.6 percent as compared to private cars (13.7 percent), buses (10.2 percent), car passengers (13.7 percent) and trains (4.4 percent).

South African taxi associations are enthusiastic about the opportunity to leverage this popularity to make a significant change in those factors that cause their members the most worry and trouble. Simply by reaching out to their passengers with The Way to Happiness, they intend to directly effect a change in the state of the country—one person at a time.

The Church of Scientology and its members are proud to share the tools for happier living contained in The Way to Happiness. Some 117 million copies have been distributed in 186 nations.

The Way to Happiness: “There is no person alive who cannot make a new beginning.”