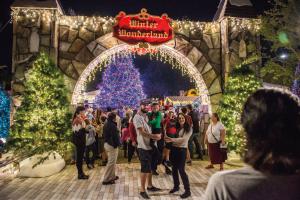 Winter Wonderland by the Clearwater Community Volunteers of the Church of Scientology brings thousands to downtown Clearwater every holiday season. Nearly eighty fresh-cut Christmas trees will be on site this year.

We have to get our order in during the summer to ensure that we receive the trees by November – just in time for their ‘planting’ at the Winter Wonderland lot.
”
— Pam Ryan Anderson, ED CCV

CLEARWATER, FLORIDA, US, September 26, 2019 /EINPresswire.com/ — Though we are just starting to feel the barest hint of fall weather, the Clearwater Community Volunteers are already thinking with Winter – Winter Wonderland that is. The annual holiday village that attracts thousands to downtown Clearwater in December placed their order this week for a very fundamental for the event.

“A big part of Winter Wonderland is the real Christmas trees that populate the lot,” said Pam Ryan Anderson, the Executive Director of the Clearwater Community Volunteers (CCV). “We usually need between 70 – 80 perfect Christmas trees. We have to get our order in during the summer to ensure that we receive the trees by November – just in time for their ‘planting’ at the Winter Wonderland lot.”

The trees are raised on a 300-acre tree farm in Tomahawk, Wisconsin where an average of 6,000 trees is planted annually. In preparation for the trek to Clearwater, the trees are carefully trimmed by hand to create a perfect Christmas tree. They are then transported through several stops between Wisconsin and Florida.

“Last year, we were the truck’s last stop,” said Michael Soltero, who directs’ CCV’s Center in downtown Clearwater. “Despite the distance, there was still snow on the trees when we unloaded them.”

Nearly 80 trees, including one of more than fifteen feet in height, were secured, decorated and provided a festival holiday backdrop to the other activities, which include a bouncy house, a petting zoo and the opportunity to meet Santa Claus.

Clearwater’s Winter Wonderland, opening Friday December 6th through to the 22nd of December, is also a food and toy drive for needy children and families. Visitors are asked to bring an unwrapped toy or non-perishable food item and put it in Santa’s sleigh. All of the donations will be given to The Pinellas Sheriff’s Police Athletic League to help families over the holidays.

Winter Wonderland is seeking volunteers for Winter Wonderland’s construction and the running of the Village once it is open. The event will be open every day from 6pm to 9pm through December 22nd, except on Mondays and Tuesdays. Admission is free.

Clearwater Community Volunteers (CCV) is a non-profit, charitable organization made up entirely of volunteers and was founded by parishioners of the Church of Scientology in Clearwater. CCV produces the “Ginormous Easter Egg Hunt” in Coachman Park in Clearwater every spring, Fashions with Flair fundraiser fashion show and Winter Wonderland. CCV gets their inspiration from humanitarian L. Ron Hubbard’s article, “Love and Help Children” in his book The Way to Happiness. CCV has raised hundreds of thousands of dollars over the past 25 years for charities such as Nourish to Flourish, Shriners Hospitals for Children Tampa, Boys and Girls Club of the Suncoast, Homeless Empowerment Program, the Make-A-Wish Foundation, the Police Athletic League and The Children's Home, Inc., the oldest orphanage in Tampa.