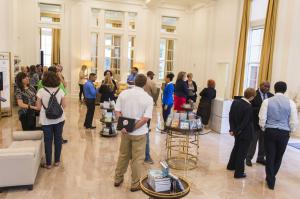 Guests attend a community reception at the Scientology Information Center in Downtown Clearwater. Over thirty new videos have been added to the Center’s audio-visual library of 400 short films on every aspect of Scientology.

Dozens of guests visiting the Center so far this week have already gotten a chance to see some of these new videos.”
— Amber Skjelset, manager Scientology Information Center

CLEARWATER, FLORIDA, US, September 26, 2019 /EINPresswire.com/ — On September 19th, 2019 the Scientology Information Center in downtown Clearwater announced the addition of over 30 new videos to its audio-visual library of 400 short films. The new videos include: how Dianetics helps one deal with grief and loss; what is the cause of conflict, war and marital distress; “A Day in the Life of L. Ron Hubbard,” not to mention short video presentations showing the magnificent Fort Harrison and Flag building.

“Dozens of guests visiting the Center so far this week have already gotten a chance to see some of these new videos,” said Amber Skjelset, Manager of the Scientology Information Center. “One local guest remarked, ‘I had no idea that [the Flag Building] looked like that. That was amazing!’”

Following the wise adage, “Think for yourself,” the Center was established to create awareness,understanding and provide answers to questions about Scientology.

Since its opening on July 11, 2015, over 47,000 curious guests have come to the Center which is located in the historic Clearwater Building, once the site of one of Clearwater’s oldest banks.

The Center is open daily, 10am-10pm. No appointment is necessary. For more information about the Center, or Scientology please contact Amber at 727-467-6966, email amber@cos.flag.org or visit www.scientology.org. You can also tune in to the 24-hour Scientology Network on DirecTV channel 320, or log on at www.scientology.tv or apps at appleTV, fireTV and ROKU.