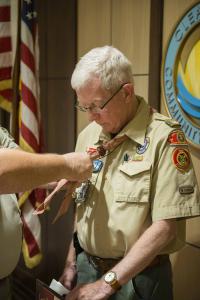 Geary Titus, BSA unit commissioner and leader of Troop 313 chartered by the Church of Scientology FSO received a Wood Badge tie and slide at the CCV Center downtown Clearwater.

The Scout program is one of the most important we currently have for our youth. Being able to contribute on such a broad scale to help tomorrow’s leaders is a privilege.”
— Geary Titus, Wood Badge Leader BSA

CLEARWATER, FLORIDA, US, September 26, 2019 /EINPresswire.com/ — On September 23rd, 2019 Boy Scout (BSA) Troop 313, chartered by the Church of Scientology Flag Service Organization, celebrated a one-of-a-kind accomplishment for Greater Tampa Bay Area Council Scout Commissioner, Geary Titus on earning his Wood Badge. Wood Badge is an advanced leadership course for Scouts and Scout leaders. It is the equivalent of an Eagle Scout level for an adult Scout volunteer. The celebration was held at the Clearwater Community Volunteers Center located in downtown Clearwater.

“The Scout program is one of the most important we currently have for our youth” said Titus. Being able to contribute on such a broad scale to help tomorrow’s leaders is a privilege.” Mr. Titus has been an Eagle Scout for over 55 years. He is also a National Eagle Scout Association Legacy Society Fellow and a James E. West Fellow at the local council level.

L. Ron Hubbard, Founder of Scientology and Eagle Scout himself, also felt that Scouting was very important. He said, “Of all the various information which became important to me, such as photography, woodlore, signaling and many other subjects, the basis of it was laid in Scouting. I am very indebted to a great many, very fine men who gave their time and attention to a restless, boisterous and extremely active boy and teenager, and I must have tried their patience many times but I never heard of it from them.”

Troop 313 is open to boys of any faith, as is any troop of the BSA program. Boys in Scouting are encouraged to be faithful and loyal, as laid out in the Scout Oath and Law.

To find out more information about the Clearwater Community Volunteers Center or about Boy Scouts Troop 313 please call Michael Soltero at (727) 316-5309 or email ccvcenter@ccvfl.org.

About the Church of Scientology

The Scientology religion was founded by humanitarian and philosopher, L. Ron Hubbard. The first Church of Scientology was formed in the United States in 1954 and has expanded to more than 11,000 churches, missions and affiliated groups, with millions of members in 165 nations. Scientologists are optimistic about life and believe there is hope for a saner world and better civilization, and actively do all they can to help achieve this. The Church of Scientology regularly engages in many humanitarian programs, such as anti-drug campaigns, human rights campaigns and global education programs. To learn more, visit www.scientology.org.