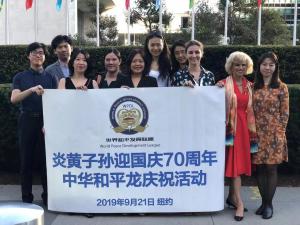 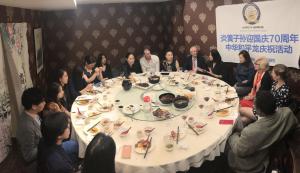 WPDL hosted a dinner at a Chinese restaurant to wish China a happy 70th birthday.(WPDL) 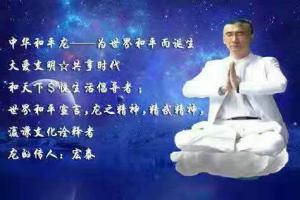 This event was organized by Jing Zhao Cesarone, CEO of Global CSR Foundation (GCSRF) and co-founder of WPDL, Sha Zhu, COO of GCSRF and Dr. Linda J. Stillman, Founder and President of Young Global Leadership Foundation. They were attending the UN Climate Action Summit to learn the updates of UN Sustainable Development Goals and to plan the road ahead. The Summit occurred ten days prior to the 70th National Day for China on October 1st.

In 2001, the United Nations General Assembly unanimously adopted resolution 55/282 to establish September 21st as an international day of non-violence and cease-fire. The resolution 55/282 invites all nations and peoples to cease hostilities on this day, and urges all Member States, organizations of the United Nations system, regional and non-governmental organizations and individuals to commemorate, in an appropriate manner, the International Day of Peace, including through education and public awareness, and to cooperate with the United Nations in the establishment of the global ceasefire.

Each year the International Day of Peace is observed around the world on September 21st. October 1st happens to be the 70th National Day for China this year . In observance of both important holidays, WPDL gathered its members and friends in front of the UN Headquarters. Later in the evening, WPDL hosted a dinner at a Chinese restaurant to wish China a happy 70th birthday.

Founded in the United States in 2019, the WPDL is a world peace organization that unites the global Chinese, integrates the East and West civilizations, and builds a community of common destiny. WPDL focuses on world peace and the sustainable development of human civilization, advocates universal values which are rooted in the 5,000-year Chinese civilization. This event demonstrates that the Chinese Peace Dragon was born for world peace, and WPDL welcomes people around the world to build "Harmonious World and Joyful Life "together.