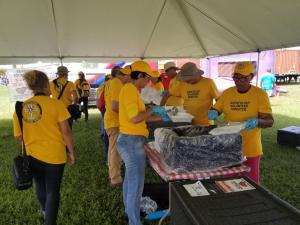 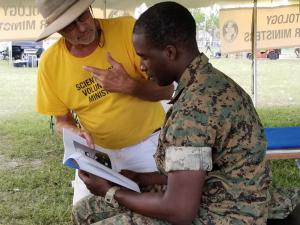 Members of the military grasped the value of these tools for helping in the aftermath of a catastrophe. 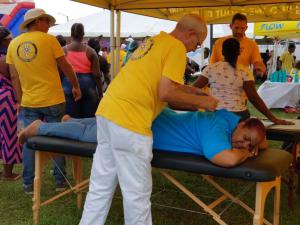 Volunteer Ministers delivered more than 100 assists their first day in the park. 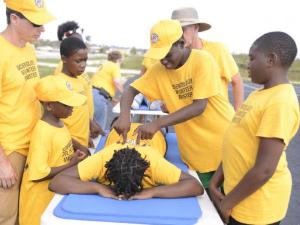 Local residents of all ages join seasoned Volunteer Ministers who train them to do assist. So simple, yet effective, anyone can learn these techniques and help their friends and families. 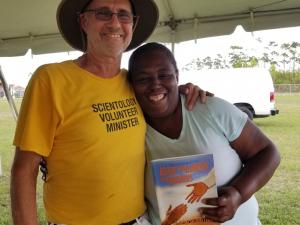 There is nothing more rewarding than being able to help another.

Simple Scientology technology called the “assist” is helping disaster victims in the Bahamas cope with their loss and look to the future.

LOS ANGELES, CALIFORNIA, UNITED STATES, September 28, 2019 /EINPresswire.com/ — While the Scientology Volunteer Ministers (VMs) in the Bahamas continue their work to clear roads, shore up homes and provide food and supplies to those in need, one key element of their outreach is assists—techniques developed by Scientology Founder L. Ron Hubbard that address the emotional and spiritual factors in stress and trauma.

From their bright yellow tent, Volunteer Ministers who flew in from the U.S and new local VMs who recently came on board served more than 15,000 meals and handed out everything from cleaning supplies to hygiene kits, canned food, water, blankets, towels, feminine products, diapers, clothing and wipes.

But their tent was also bustling with another service—one that addressed something far more personal.

Volunteer Minister from Australia, responding to another disaster, once put it, “Have you ever seen someone in shock? Their eyes are sort of vacant like no one’s home. Their ‘lights are out.’ That’s because the majority of their attention is stuck back in time at the point of trauma. These people have seen some nasty things and often that stays in their mind. We do assists to relieve that. Then they can go home, sleep, and they don’t have those pictures stuck in their minds.”

Throughout the ages, religions have attempted to relieve man’s suffering. L. Ron Hubbard, Founder of the Scientology religion, developed numerous applications of his discoveries to address the mental and spiritual aspects of a person’s physical difficulties.

In developing the Scientology Volunteer Minister program, Mr. Hubbard wrote, “A Volunteer Minister does not shut his eyes to the pain, evil and injustice of existence. Rather, he is trained to handle these things and help others achieve relief from them and new personal strength as well.

“How does a Volunteer Minister accomplish these miracles? Basically, he uses the technology of Scientology to change conditions for the better—for himself, his family, his groups, friends, associates and for Mankind.”

When confronted by someone who has been injured or ill, operated upon or who has suffered a grave emotional shock, Volunteer Ministers use assists. The Volunteer Ministers delivered more than 100 assists to those visiting the tent and trained many others to be able to use these techniques with their families and friends.