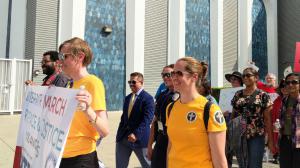 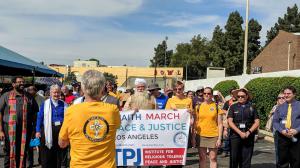 Members of many Los Angeles faiths gathered in the name of religious freedom and tolerance. 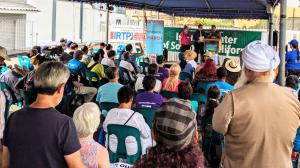 Institute for Religious Tolerance organized marches in 16 U.S. cities and six other countries.

The Church of Scientology joined religious groups from across the city to march to raise awareness of the state of religious freedom in the world today.

LOS ANGELES, CALIFORNIA, UNITED STATES, September 29, 2019 /EINPresswire.com/ — Youth for Human Rights of California and volunteers from the Church of Scientology Los Angeles joined human rights and religious groups from across the Southland at the Islamic Center of Southern California for the annual Interfaith Solidarity March of Peace and Justice.

The march, organized by the Los Angeles-based Institute for Religious Tolerance (IRTPJ), is part of an international movement. Religious tolerance advocates participated this year in 16 U.S. cities and five other countries including Israel, where advocates marched in Tel Aviv and Bethlehem.

“This is the largest coalition of interfaith marches in the world,” said program organizer, IRTPJ Founder and President Dr. L. Arik Greenberg.

The purpose of the march is to raise awareness of the freedom of religion or belief—the right of people to choose to practice any religion without fear of reprisal, discrimination or abuse. All religions are entitled to equal justice and protection under the law.

The urgency of protecting this right was highlighted recently by Ambassador at Large for International Religious Freedom Sam Brownback, who said, “80 percent of people live in places where religious freedom is under attack.” Brownback also emphasized the importance of the “grassroots movement for religious freedom,” that he sees as “beginning to take hold around the world.”

Contributing to that grassroots movement was the IRTPJ march that began in the Wilshire district at the Islamic Center of Southern California, with stops for speeches and presentations at the Founders Church of Religious Science and Immanuel Presbyterian Church.

For the Church of Scientology Los Angeles, this was the final event of a five-part series of activities in support of interfaith understanding and tolerance. For the past four weeks, the Church hosted its fourth annual series of interfaith forums to bridge differences, dispel misconceptions and promote tolerance.

Los Angeles is a cultural tapestry whose residents practice more than 100 religions or denominations, hail from some 100 countries and speak twice as many languages. The Church of Scientology Los Angeles celebrates the ethnic diversity of the city with programs that promote communication and understanding among all who call Los Angeles home.

For more information on the Church of Scientology Los Angeles and its many community programs, watch Inside a Scientology Church on the Scientology Network.