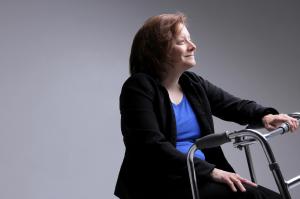 Our Canadian and provincial governments are more interested in legislating death than in promoting better health care and life assistance for all its people.”
— Dr. Paul Saba

MONTREAL, QUEBEC, CANADA, September 30, 2019 /EINPresswire.com/ — Two Canadian living with disabilities are appealing to the future Prime Minister of Canada during the upcoming elections to appeal the recent Quebec Superior Court judgement which allows people with disabilities who have many years to live to prematurely end their lives. This judgement highlights the dangerous expansion of euthanasia and assisted suicide that currently has killed approximately 7000 Canadians from 2016-2019.

Lisa D’Amico now in her 50s was born with cerebral palsy. She is President of Victims of Medical Errors which defends the rights of people with disabilities.

She lives in extreme poverty with an annual income of about $12,000 CDN yearly from the government’s social programme. Often she cannot afford more than one meal a day. She cannot afford, physical and hydrotherapy that would help improve her physical condition. Moreover she is unable to significantly supplement her income by part-time work ($2400 CDN yearly) or accept donations of more than $200 CDN to improve her quality of life. She is not even allowed to accept an airplane ticket to go South in the winter. Even when given an opportunity, the government forbids her from leaving the province for more than 7 consecutive days to travel within Canada or abroad, even in winter.

According to Lisa “you have a situation of perfect distress for wanting to choose euthanasia."

Jonathan is in his 40s and has lived with a form of muscular dystrophy since the age of 15. After a bout of severe pneumonia, he was hospitalized in the intensive care unit and required an emergency tracheotomy to help him breathe. He is now ventilator dependent and needs assistance. Previously Jonathan worked as a senior computer network engineer in Quebec and overseas in Australia.

Jonathan has been forced to live in a government run institution against his will since 2012.
Nearly 70% of people with disabilities who need help like Jonathan are institutionalized in Quebec due to the lack of adequate support services in the community. This numbers around 15,000 people in Quebec and 60,000 people in Canada.
According to Jonathan "Many doctors offered me euthanasia, which they call "comfort care” to end my life.
Because there is no support services to live outside hospitals for people like me in Quebec, I have to choose between death or live in a hospital or a nursing home for the rest of my life."

According to Jonathan this situation exists despite the fact that governments can save millions of dollars to deinstitutionalize people with disabilities (figures available).

"I have never been offered the possibility of being able to continue my life at home with the help I need. In institutions, you lose autonomy and control over your life.

I never asked for help to die, I was getting better.

They were ready to help me commit suicide and not provide assistance for me to live. It's not a real choice. "
Despite this, he refuses to give up his life, his wife, family and friends.

According to Lisa and Jonathan, how can we talk about “assisted suicide and euthanasia” for people with disabilities when they do not even have help to live.

What they are asking for is not to die, but rather the support to live in the community to participate and contribute actively to society.

In the end, Dr. Paul Saba who has been a leading advocate for patients’ rights to live, states that Canada's assisted suicide and euthanasia laws have created an open door for abuse and harm for all Canadians, who will one day in their lives face health challenges that will require health and life assistance. "Our Canadian and provincial governments are more interested in legislating death than in promoting better health care and life assistance for all its people. This is extremely unfair.”