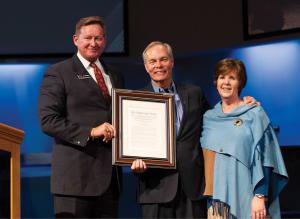 Charis Bible College was created by Andrew Wommack, who has been a pioneer in Christian education and ministry.”
— Representative Doug Lamborn

He said that it was “nothing short of miraculous” that from the time Charis Bible College, originally known as Colorado Bible College, was founded in 1994, it has grown from graduating 33 students from its Colorado campus, to graduating students worldwide on its other 26 U.S. and 22 international campuses.

Representative Lamborn expounded on the local importance of the Charis Colorado headquarters campus:

“In my district, the Charis campus provides multiple programs of Bible-based education including a practical government degree. It also hosts faith-based events throughout the year with discussions on Christian art, culture, and politics,” Lamborn said. “Charis Bible College was created by Andrew Wommack, who has been a pioneer in Christian education and ministry. His vision to have men and women steeped in scripture has changed countless lives in my district and around the world.”

On Sept. 28, Charis Bible College celebrated its 25th anniversary on campus with Charis alumni, students and invited guests. Jeff Anderson, senior advisor to Representative Lamborn, was on hand to present on behalf of Representative Lamborn to Andrew Wommack, the official record of the United States Congress that memorializes the 25th anniversary.

About Charis Bible College
Charis Bible College was started by Andrew Wommack to train disciples for the work of the ministry. His vision is to change the body of Christ’s perception of God by preparing and sending leaders to proclaim the truth of the Gospel of Jesus Christ throughout the world. Charis Bible College is headquartered in Woodland Park, Colorado, and has more than 40 campuses around the world. Find Charis at charisbiblecollege.org, on Facebook or on Twitter.