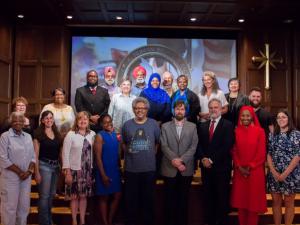 International Peace Day celebration at the Nashville Church of Scientology

Organized in coordination with Tennessee United for Human Rights (TUHR), each of the past four International Day of Peace events has featured a different theme related to the Universal Declaration of Human Rights.

“This year, we brought together a multicultural, multifaith group that spoke of peace on a universal level,” said Rev. Brian Fesler, pastor of the Nashville Scientology Church and regional coordinator of Tennessee United for Human Rights.

International Day of Peace was established by the United Nations General Assembly as a day devoted to strengthening the ideals of peace, both within and among all nations and peoples.

Those participating included representatives of the Church of Jesus Christ of Latter-day Saints, the African Methodist Episcopal Church, the Church of Scientology and the Sikh, Bahá'í, Jewish and Muslim faiths.

Article 18 of the Universal Declaration of Human Rights states: Everyone has the right to freedom of thought, conscience and religion; this right includes freedom to change his religion or belief, and freedom, either alone or in community with others and in public or private, to manifest his religion or belief in teaching, practice, worship and observance.

The religious leaders attending reflected the diversity of Nashville. The city’s thriving music industry, colleges and universities, and its expanding job market attract new residents, with an average of 83 people moving to Nashville each day between July 2017 and July 2018. The region continues to enjoy all-time-high tourism and record-low unemployment. It is also a popular destination for immigrants, who make up some 12 percent of the population. With this diversity comes a broad array of beliefs and practices.

By presenting each religious leader with the opportunity to share their beliefs with those assembled, each gained a better understanding and a heightened interest and willingness to cooperate in endeavors to improve the community as a whole.

Freedom of religion or belief and peace go hand in hand.

According to a study published in the Interdisciplinary Journal of Research on Religion, freedom of belief is one of three factors significantly associated with many other freedoms and with global economic growth:

Research shows that laws and practices that exclude religion are related to higher levels of corruption.

When religious freedoms are not respected, the result can be violence and conflict. Normal economic activities become vulnerable to disruption, with local and foreign investment-driven away and sustainable development undermined.

Some religious restrictions can directly affect economic activity, creating legal barriers for import and export industries, such as the halal food market.

Freedom of religion can contribute to a rich pluralism that is itself associated with economic growth.

A wide diversity of religious congregations in a city contributes many millions of dollars to the economy through direct spending and activities ranging from educational and health services to a network of relationships that helps provide jobs and a safety net for those facing hard times.

Human rights, as outlined in the Universal Declaration of Human Rights (UDHR), form the bedrock of social and human relations.

The Church of Scientology and Scientologists support United for Human Rights and make its educational materials available free of charge. For more information, watch "The Story of Human Rights" on the Scientology Network.

Respect the Religious Beliefs of Others