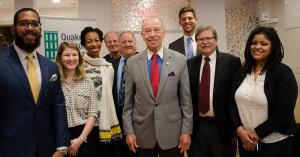 Participants in the Interfaith Criminal Justice Coalition, including John Stanard, with Senator Grassley 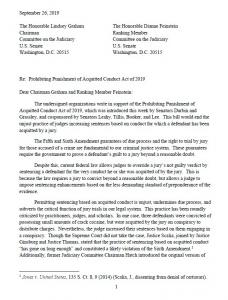 The Church has a historical legacy of speaking out against injustice in whatever form it may take.”
— John Stanard, National Director for Social Betterment

The bill, introduced this week, was cosponsored by Senators Patrick Leahy (D-VT), Thom Tillis (R-NC), Cory Booker (D-NJ), and Mike Lee (R-UT). If enacted, the legislation would end the unjust practice of judges increasing sentences based on conduct for which a jury has acquitted a defendant.

The letter points out that under current federal law judges may override a jury’s not guilty verdict and sentence a defendant for conduct he or she was acquitted of by a jury. This is because the law requires a jury to convict beyond a reasonable doubt, but allows judges to use a less demanding standard when imposing sentencing enhancements.

As an example of the kind of injustice that can happen under current law, the letter cites the case of three defendants who were convicted of possessing small amounts of crack cocaine but were acquitted by a jury of conspiracy to distribute charges. However, the judge in the case increased their sentences based on their actions, even though a jury found them not guilty of a crime for those actions. On appeal to the Supreme Court, which did not take the case, Justice Scalia, joined by Justice Ginsburg and Justice Thomas, stated that the practice of sentencing based on acquitted conduct “has gone on long enough” and constituted a likely violation of their Constitutional Rights.

“The Church has a historical legacy of speaking out against injustice in whatever form it may take,” stated John Stanard, National Director for Social Betterment at the Church’s national office. “Decades before the U.S. built up the largest prison population in the world, our Founder, L. Ron Hubbard, spoke out about the danger of creating more hardened criminals through the excessive use of incarceration in his essay The Criminal College,” Stanard stated. “We continue to follow his lead,” Stanard continued “both with advocacy as well as through support of the Criminon program, whose rehabilitation curriculum is based on secular derivations of Hubbard’s humanitarian research. Criminon provides justice-involved individuals with real-world skills they can use to improve their decision-making and reverse negative life habits,” Stanard stated.

Since 2013, Mr. Stanard has been an active national advocate for criminal justice reform working in a bipartisan manner with other like-minded reform groups such as the Interfaith Criminal Justice Coalition, consisting of over 50 national, faith-based advocacy organizations in Washington, DC.

“The Church will continue its advocacy work in collaboration with its national faith partners and
other like-minded organizations to enact further, much needed reforms to improve the criminal
justice system in this country,” concluded Stanard.