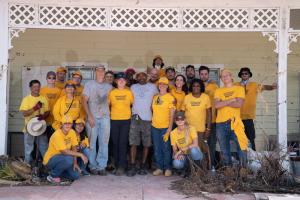 The Volunteer Ministers with Mr. Johnson, after a day’s hard work. 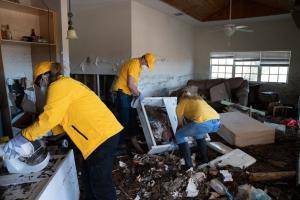 The work can seem endless midway through the cleanup. 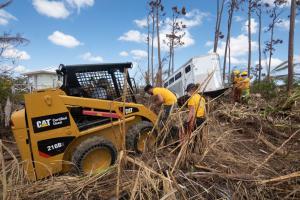 The Volunteer Minister took on getting the horse trailer down from where it had lodged in the trees during the storm. 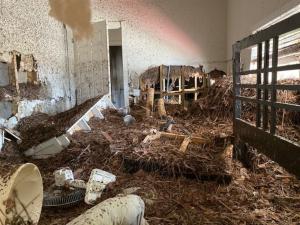 When they arrived, most rooms were filled with branches and other debris. 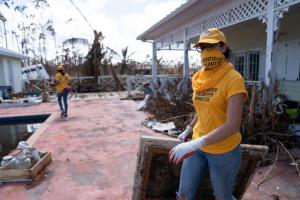 They wore masks to protect themselves from the mold that grows in the storm-soaked walls, carpets and furniture.

“Such an overwhelming feeling of relief and excitement this morning to have this group of Scientology relief workers pull up in full force to help.”

LOS ANGELES, CALIFORNIA, UNITED STATES, October 3, 2019 /EINPresswire.com/ — These were the words posted on Facebook this weekend when the Scientology Volunteer Ministers Bahamas Disaster Response Team answered a call for help. “My heart is full,” the post continued. “So thankful to all the people on our island helping those in need, but today for the Scientology relief group who never even questioned—they just said YES we will be there.”

This family’s story started exactly one month ago when Hurricane Dorian tore into Grand Bahama Island.

As reported in the South Florida Sun-Sentinel, “As 85-year-old Virginia Mosvold floated in the rising ocean waters during Hurricane Dorian, helpless family members could do nothing more than watch from the rafters and prepare for the worst.

“But Mosvold somehow managed to cling to a refrigerator in her Bahamas home and keep her head above water—for three agonizing days.”
She was finally rescued by the Coast Guard and flown to Florida where she is receiving treatment.

“Outside their home, their entire farm, formerly a tourist destination on the east end of Grand Bahama, was destroyed. The Johnsons had operated Ol’Freedom Farm for 10 years.”

“They lost six horses, 65 goats, four dogs, peacocks and chickens in the storm,” said one of the Volunteer Ministers who responded to their request. “When we arrived, the entire house was filled with 5 feet of trees and storm surge debris. They are still in the process of locating and burning animal carcasses. The farm itself was destroyed but the house is still standing with the interior destroyed.”

The farm is a well-known landmark for the island and its destruction was a blow to local residents.

“We showed up to help as we promised we would a few days ago,” said the Volunteer Minister who led the team in the cleanup. “We did a muck-out of the house, including removing personal items that were salvageable and those that were destroyed. We used pitchforks, shovels and our hands to remove over 5 feet of debris that had been pushed into the house from the woods.

“When we walked in, you had to climb over 5 feet of bark, logs, leaves and dirt just to get in the house. We cleared out the main hallways, the kitchen and several of the bedrooms. We cleaned out about half of the garage. We chainsawed several trees that were sticking out of the house windows.”

One horse trailer had floated up into a tree during the storm and was stuck there. It was one of the only items of value left on the property.

“George thought he was going to have to hire a crane to get it out,” said the Volunteer Minister, “but we used the chainsaw crew and a Caterpillar front loader to figure out how to get it out and pulled it down safely. It can now be loaded up with anything he can salvage. He had one of the biggest smiles I’ve ever seen when we pulled the trailer out. He thanked us all about 10 times and said he never expected such a large group to come and help him.”