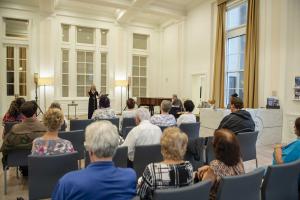 Joanie Sigal inspired the audience on September 29th at the Scientology Information Center. Thousands of residents and tourists have enjoyed the center’s tours and events since its opening in July 2015.

Sigal returned to the Center and the place where her Tampa Bay singing career began over 20 years ago. Sigal performed popular songs from Broadway musicals and classic films including, Wicked, Fiddler on the Roof, Phantom of the Opera and The Secret Garden with narration on the history of each song.

“With a vocal range that approaches opera and years of theatrical experience – Sigal enchanted the audience with what her fans refer to as an ‘angel voice,’” said Amber Skjelset, event organizer and manager of the Scientology Information Center.

At the event’s close Sigal received a standing ovation. Sigal took the opportunity to invite guests to upcoming events at the Information Center including the Halloween- themed live dramatic reading by the L. Ron Hubbard East Coast Theatre of, Danger in the Dark which she narrates (Friday, October 25th, 6:30pm) and her own Holiday Concert with Christmas favorites to sing along to (Sunday, December 8th, 6:30pm).

One guest and dedicated fan remarked after the concert, “I have to admit, hearing Joanie sing literally brought tears to my eyes!”

“The Scientology Information Center not only provides information on Scientology, it is also a venue for complimentary cultural events such as performances and parties which strengthen community bonds,” said Skjelset.

The Information Center's doors are open daily, 10am-10pm, Mon-Wed, 10am-8pm on Thurs; and 1pm-10pm on Saturday. No appointment is necessary. For more information about the Center or Scientology, please contact Amber at 727-467-6966, email amber@cos.flag.org or visit www.scientology.org or the Scientology Network on DirecTV Channel 320, or streaming at www.scientology.tv or apps at appleTV, fireTV and ROKU.

The Scientology Information Center, located in the century-old Clearwater Building in downtown Clearwater, opened on July 11, 2015, and currently houses a gallery of audiovisual displays with some 400 videos. The Center is open to all and provides a self-guided tour showing basic Scientology beliefs, Churches around the world, ongoing social programs and the life of L. Ron Hubbard, Scientology’s founder. The Center offers tours; holds concerts, theatrical performances and receptions for the community; and opens up the use of its conference room to social, civic and non-profit groups.