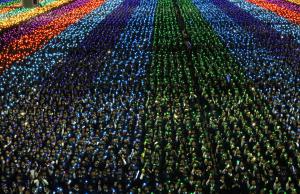 Graduates of Shincheonji Church of Jesus, Temple of the Tabernacle of the Testimony 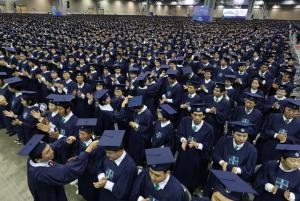 Moving of the Tassle at 100,000 Shincheonji Graduation

WASHINGTON D.C, D.C, UNITED STATES , November 10, 2019 /EINPresswire.com/ — On November 10, 2019, more than 100,000 graduates completed a Bible study at
Shincheonji Church of Jesus the Temple of the Tabernacle of the Testimony, a rapidly
rising denomination in the Republic of Korea.
In only a year, a total of 101,286 people passed a graduation exam after studying the
Bible in its entirety for six months, which is an unprecedented phenomenon taking place
globally. The graduation was held in the province of Gyeonggi-do and the free Bible
study program is a prerequisite for graduates to register as members of Shincheonji,
Church of Jesus, the Temple of the Tabernacle of the Testimony (or Shincheonji for
short). Approximately 50,000 audience members were present and the graduation was
broadcasted in other major cities throughout the world. International graduates also
participated through live stream broadcast, including Washington D.C.
In a world of declining church attendance rates due to various critiques on religion
today, a great number of people are coming to Shincheonji to study the Bible and fill
their spiritual needs — which has resulted in such unprecedented growth for a church.
Having 100,000 graduates is equivalent to having 100 churches of 1,000 congregation
members, which is greatly different from the drastic fall of the number of congregation
members seen globally in the world of religion. Shincheonji has been the only place in
the world where 100,000 people graduate at one time after completing an in-depth Bible
study.
One graduate said he decided to go to Shincheonji because he was not able to fill his
“spiritual hunger” in his previous church. “However, in Shincheonji I was able to fill it
with the words of the Bible and understand a clear purpose of my life as a
Christian…and have a logical and a clear understanding of what it means to be reborn
with the Word.”
A survey conducted of the 100,000 graduates showed that 41.7% were believers
practicing their faith under pre-existing denominations such as Protestantism,
Catholicism, and others.
“Numerous people are leaving their churches due to the corruption and secularization
that is prevalent in many churches today, but Shincheonji helps believers to have a
logical and a clear understanding of what it means to be reborn with the Word,” the
graduate continued.
According to a survey of new graduates, 95% of those who come to Shincheonji are
interested in its teaching of the Bible. Shincheonji teaches the Bible in its entirety from
the book of Genesis to Revelation in half a year. Shincheonji is the only place that
teaches the fulfillment of the prophecies of the Book of Revelation in the Bible.
However, Shincheonji, which has been growing at a rapid pace since 1984, has been
labeled as a “cult” by many Christians in the Republic of Korea.
Graduates reported that allegations made against Shincheonji such as “Shincheonji
claims that the founder of Shincheonji is the One Who Overcomes” and “Shincheonji
hides their true identity when evangelizing and brainwashes the people with their
teaching” are false.
“I’m proud to have graduated from Shincheonji,” says the graduate.
Shincheonji congregation members believe this graduation only marks the beginning of
growth for the new denomination globally.