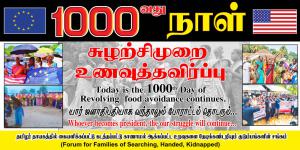 Tamils need the same political remedy as the Bosnian federal solution. It can be brought about by the US, EU and India only.

VAVUNIYA, NORTHERN PROVINCE, SRI LANKA, November 15, 2019 /EINPresswire.com/ — We are here today to complete the 1000th day of a revolving Hunger Strike in which all Tamil mothers are taking turns.

During this process, we had a meeting with President Srisena, Prime Minister Ranil Wickramasinghe and Sinhalese ministers. None of the meetinga were fruitful.

Even our elected Tamil leaders were not helpful. TNA leader Sampanthan had told us that he does not have the keys for the prison to release Tamils who were forcibly "disappeared." It is shameful to hear our elected leader Sampanthan saying that he has no keys, despite the fact that he promised us that during the election campaigning 2015 to work harder to find missing people.

It is part of a conpiracy to stop US and EU involvement in ending Sri Lankan human rights violations.

We have been told by many international human rights groups that only a struggle will bring a solution to finding our missing children and loved ones.

We have been encouraged by strong countries to continue our dedicated efforts. Even some UN related organizations have encouraged our fight.

Prime Minister Ranil Wickramasinghe had said that all of the missing people were killed. But he was not correct. We have seen the missing, including a 12 year-old girl, daughter of our president of missing people Vanitha. She was seen after 6 years with President Srisena along with other Sinhalease students at a school.

It reminds us of the enforced disappearance of children in Argentina between 1976 – 1983. Like what happened in Argentina, some of these Tamil children were given to Sinhalease families who were close to government. Some of them are in school, working for fisherman and others in manual labor professions. Some of them were converted as Budhhist Bhikkus. Many children were sold as sexual slaves.

It is estimated that more than 25,000 Tamil children and others disappeared in 2009.

The only course of action is to send this Sri Lankan war crime to the International Criminal Court like the world did to Serbia. The ICC was able to catch all of the war criminals in Bosnia and Kosovo.

Especially in Bosnia, some of these captured war criminals were able provide the whereabouts for the missing people in Bosnia.

We need the same Bosinian-style procedure to find the missing Tamil people.

Eventually, the US forced a political solution in Bosnia so that three ethnic groups—Serbians, Bosnians and Croatians—could live without fighting with their own self-rule.

Tamils need the same political remedy as the Bosnian federal solution. It can be brought about by the US, EU and India only.

If Sri Lanka refuses to accept Bosnian-style Federalism, then the US must support a UN-monitored referendum.

We will continue our struggle until we find our children and loved ones who have been stolen from us.

Before we reach 2000th day of our struggle, we hope to find our missing people, and find a permanent protection and self rule.

Gopalakrishnan is Rajkumar.
Secretary of the Association of Enforced Disappered in Tamil Homeland.
Chairman of the Vavuniya Citizens Committee.

G. Rajkumar
Secretary of the Association of Enforced Disappered in Tamil
+94 778547440
email us here