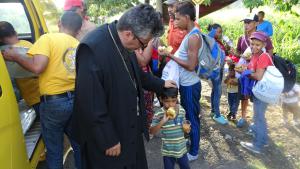 Working together, Greek Orthodox and Roman Catholic priests and Volunteer Ministers deliver food to refugees on the Colombian border. 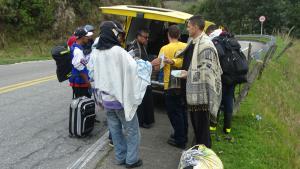 Handing out copies of “The Way to Happiness,” a Catholic priest brings hope and help to immigrant families. 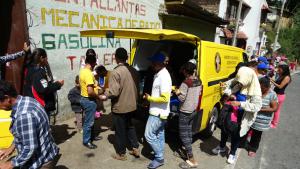 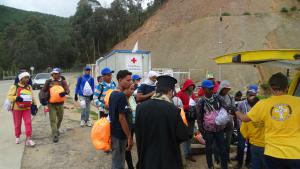 Religions and NGOs work together to help in this humanitarian crisis. 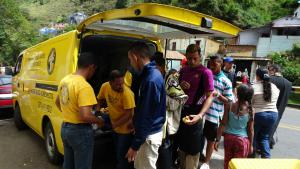 The need for volunteer help is tremendous.

The Colombian government has recognized the Catholic Church, Greek Orthodox Church and the Church of Scientology for their aid to Venezuelan refugees.

LOS ANGELES, CALIFORNIA, UNITED STATES, November 18, 2019 /EINPresswire.com/ — Life has been harsh for the refugees in the border town of Cúcuta. Fleeing the humanitarian crisis in their native Venezuela, some 1.2 million have made the arduous trek west to Colombia, seeking a better life.

Colombia has been hard-pressed to provide for the needs of these people, and nonprofits and religious organizations have stepped in to provide care—among them the Volunteer Ministers of the Church of Scientology.

According to the U.N., as many as 4 million people have fled Venezuela, which has been racked by economic depression and political chaos. Since March, Scientology Volunteer Ministers have been working with Catholic and Greek Orthodox churches and nonprofit organizations in the Colombian cities of Cúcuta and Villa del Rosario, preparing and serving meals, distributing supplies, and caring for the emotional and spiritual needs of the refugees.

In coordination with NGOs, the Fire Department and local government officials, Volunteer Ministers help orient those arriving to the services and resources available to them. They also provide relief from the trauma the refugees have suffered. And the training and seminars in simple life skills provided by the Volunteer Ministers help those seeking opportunity in Colombia cope with and better their circumstances and bring them new confidence and direction so they can turn their lives around.

In developing the Scientology Volunteer Minister program, Mr. Hubbard wrote, “A Volunteer Minister does not shut his eyes to the pain, evil and injustice of existence. Rather, he is trained to handle these things and help others achieve relief from them and new personal strength as well.

“How does a Volunteer Minister accomplish these miracles? Basically, he uses the technology of Scientology to change conditions for the better—for himself, his family, his groups, friends, associates and for Mankind.”