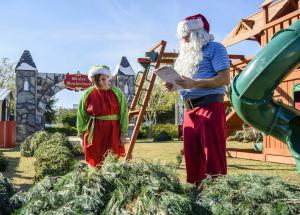 Santa Claus does quality control on several Christmas trees, slated to be a part of the annual Winter Wonderland in Clearwater. Winter Wonderland, an annual food and toy drive put on by the Clearwater Community Volunteers, will open this year on the 7th of December.

Santa does his "ornament-ability" inspection upon arrival of Winter Wonderland's Christmas trees with the help of his chief elf.

CLEARWATER, FL, US, December 5, 2019 /EINPresswire.com/ — Santa Claus and his chief elf were in downtown Clearwater this weekend to supervise a special delivery – more than eighty Christmas trees for Clearwater’s Winter Wonderland. Though the annual holiday display and food and toy drive officially begins on the 7th of December, there is still work to do. Santa wanted to be on hand to inspect the trees personally.

“Like me, these trees made a long journey from the north,” said Santa. “It is important that they are unloaded with care and are made ready for Winter Wonderland’s grand opening.”

The trees arrived after a multi-day trip by truck from a tree farm in Tomahawk, Wisconsin. The staff at the tree farm maintain over 300 acres of planted trees, planting an average of 6,000 trees a year. Before the trees are placed on the truck they are carefully trimmed by hand to create a perfect Christmas tree.

Volunteers, including Scouts from Troop 313 – chartered to the Church of Scientology Flag Service Organization – were at work getting the trees into their final locations. Santa made sure that the trees met his exact standards, including their ‘ornament-ability.’

“We are very excited for Winter Wonderland’s grand opening on December 7th when I will be back to light up the village and see each of these beautifully decorated trees again,” said Santa.

The Winter Wonderland Village is located on the corner of Drew Street and N. Fort Harrison Avenue, in downtown Clearwater.

Clearwater’s Winter Wonderland is also a food and toy drive for needy children and families. Visitors are asked to bring an unwrapped toy or non-perishable food item and put it in Santa’s sleigh. All of the donations will be given to The Pinellas Sheriff’s Police Athletic League to help families over the holidays.

Winter Wonderland will be open every day from 6pm to 9pm through December 22nd, except on Mondays and Tuesdays. Admission is free but there is a small charge for some activities and the food items in the Hot Chocolate Shop (cash-only transactions).

Clearwater Community Volunteers (CCV) is a non-profit, charitable organization made up entirely of volunteers and was founded by parishioners of the Church of Scientology in Clearwater. CCV produces the “Ginormous Easter Egg Hunt” in Coachman Park in Clearwater every spring, Fashions with Flair fundraiser fashion show and Winter Wonderland. CCV gets their inspiration from Scientology Founder L. Ron Hubbard’s article, “Love and Help Children” in his book The Way to Happiness. CCV has raised hundreds of thousands of dollars over the past 25 years for charities such as Nourish to Flourish, Shriners Hospitals for Children Tampa, Boys and Girls Club of the Suncoast, Homeless Empowerment Program, the Make-A-Wish Foundation, the Police Athletic League and The Children's Home, Inc., the oldest orphanage in Tampa.