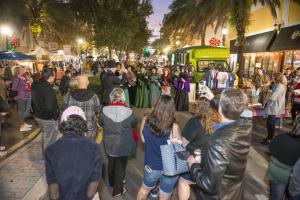 On Sat., Dec. 7th and Sun. Dec. 8th, the Scientology Info Center hosted a pair of events to help usher in the Holidays with joy, happiness and music.

The choir generated crowds, pictures and applause. Afterwards, they held an open performance in the Center’s lobby where people walking by stopped in to share the moment. Visitors of all ages participated by ringing bells provided by the choir for songs such as, Jingle Bells, and Rudolf, the Red Nosed Reindeer .

Then on Sunday evening, the Center hosted a cozy Holiday concert and sing-a-long with Ms. Joanie Sigal, noted Tampa Bay performer. She performed songs such as It’s Beginning to Look a Lot Like Christmas and Happy Holidays, and The Twelve Days of Christmas. The audience was given lyrics sheets, but most knew the songs from their youth.

One guest, Sophie, remarked after the concert, “This event was so good! It really was! The Christmas songs, especially the religious ones took me back to Catholic school. It was really special. I loved that everyone participated. My daughter really enjoyed it too. We were even dancing on our seats! It was a fun night. You could see Joanie gave it her all. She’s really a class-act entertainer. It brought us all together, no matter what our backgrounds. It was a special time and I feel like the show said, ‘Alright! It’s time for Christmas!’”

“The Information Center is not only a place for curious visitors to learn more about Scientology, it also serves as a venue which showcases artistic performances for the community through theatre, dance, song, and piano,” said Ms. Amber Skjelset, manager of the Scientology Information Center. “The Holidays are a wonderful time of year, and the music is so uplifting. I’m happy to be able to help make the season special for everyone.”

The Scientology Information Center, located in the Historic Clearwater Building in downtown Clearwater, opened on July 11, 2015, and currently houses a gallery of audiovisual displays with some 400 videos. The Center is open to all and provides a self-guided tour showing basic Scientology beliefs, Churches around the world, ongoing social programs and the life of L. Ron Hubbard, Scientology's founder. The Center offers tours to the broad public; holds concerts, theatrical performances and receptions for the community; and opens up the use of its conference room to social, civic and non-profit groups.