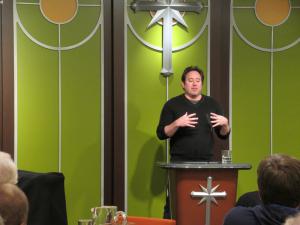 Documentary filmmaker Jon Brick briefed those gathered at the Church of Scientology Kansas City on the film “Uncommon Allies” and the need for concerted community action to end the violence.

Anyone wishing to end the senseless killings in Kansas City is invited to an open house at the Church of Scientology Kansas City on January 11.

LOS ANGELES, CALIFORNIA, UNITED STATES, January 8, 2020 /EINPresswire.com/ — The Church of Scientology of Kansas City is hosting an open house January 11 for anyone wishing to take action to end the senseless killings in the Kansas City metropolitan area. This was inspired by community response to the Church’s screening on December 27 of the documentary “Uncommon Allies” by award-winning local filmmaker Jon Brick.

“Uncommon Allies” is a call to action, and with 148 homicides in Kansas City in 2019, this is a story that needs to be told.

The film tells the story of Rosilyn Temple, who lost her son to gun violence in 2011. Ms. Temple founded Kansas City Mothers In Charge, a group of mothers, grandmothers, aunts and caring community members committed to working to prevent others from having to experience the tragedy of homicide.

The Church screening of the gripping documentary coincided with the film’s premiere on Scientology Network’s Documentary Showcase. Filmmaker Jon Brick was the special guest speaker who shared behind-the-scene stories and answered questions from the audience. The film not only covers the ordeal suffered by Ms. Temple, it also raises awareness of what Kansas City police officers have to face on a daily basis.

At the screening on December 27th, many attending brought up that they want to help end the violence.

“I think community members, every single one of us, owe it to ourselves to do something about this,” said a Christian pastor attending the screening. “Kansas City is at the top of the most dangerous cities in the nation list. There has been a denial or ignoring of the problem. I hope this documentary helps with that.”

“We are organizing a response to the violent crime, one that will enlighten and encourage our neighbors in Kansas City to join in a movement to take back our communities,” said Church of Scientology Public Affairs Director Bennette Seaman. “What we are saying with the Solutions to Violence open house on January 11th is that the violence in our city has to change at the individual level. All of us have to want change and push for change together.”

Anyone wishing to learn more about the issue of violent crime or to take action is invited to attend this open house. R.S.V.P. to reserve a seat at the Solutions to Violence open house on Saturday, January 11th, at 1:30 p.m. at the Church of Scientology at 1805 Grand Blvd., Kansas City, MO, by contacting Angie or Emma at (861) 753-6590.