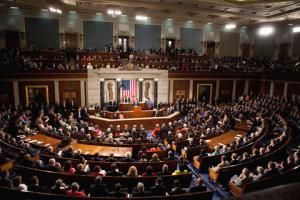 House votes unanimously on H.Res.752 in support of the uprising in Iran

Time has come for the world to recognize the right of the Iranians to change the repressive regime, establish a democratic, pluralistic & non-nuclear republic based on separation of religion & state.”
— Soona Samsami

WASHINGTON, DISTRICT OF COLUMBIA, USA, January 28, 2020 /EINPresswire.com/ — Washington, DC – January 28, 2020 — Ms. Soona Samsami, the U.S. Representative of the National Council of Resistance of Iran (NCRI-US), welcomed the unanimous passing of H.Res.752 entitled “Supporting the rights of the people of Iran to free expression, condemning the Iranian regime for its crackdown on legitimate protests, and for other purposes” in the U.S. House of Representatives.

“This timely bipartisan resolution sends an unequivocal and powerful message to the people of Iran that U.S. Congress fully supports them in their nationwide uprising for a free Iran and that it strongly condemns the massacre perpetrated by the Iranian regime in November,” Ms. Samsami said.

The bi-partisan House resolution was passed not long after the onset of the November uprising which spread to 191 cities in all of Iran’s 31 provinces. Following the regime Supreme Leader Ali Khamenei’s shoot-to-kill order, the security forces massacred more than 1,500 protesters – 724 of whom have been identified by the Iranian Resistance so far. Nevertheless, this uprising, “the most significant anti-government protests in Iran since June 2009,” shook the religious dictatorship to its foundations and is a major step towards its eventual downfall. “The uprising’s gains are irreversible; no matter how deep or wide the state suppression,” NCRI U.S. Rep. said.

The bipartisan resolution notes that the regime's security forces “have used lethal force” and “killed hundreds of people” in what it described as “the popular protests against the Iranian regime.” The resolution notes that “reports indicate that Iranian Government authorities have, in many instances, refused to return victims’ bodies to their families and that security forces have removed bodies from morgues and transferred them to un- known locations.”

The Resolution also notes that “in 1988, the Iranian regime carrying out the barbaric mass executions of thousands of political prisoners by hanging and firing squad for refusing to renounce their political affiliations and in some cases for possessing political reading material, including prisoners of conscience, teenagers, and pregnant women.” Some 30,000 political prisoners, majority of them affiliated with the Mujahedin-e Khalq (MEK), were executed during the 1988 massacre, described as “a clear case of crimes against humanity” by Amnesty International.

Ms. Samsami added: “The NCRI’s President-elect, Mrs. Maryam Rajavi, has repeatedly underscored that the slaughter of protesters in November was a manifest case of a crime against humanity and, therefore, the United Nations Security Council must take urgent action to halt the killings and suppression and secure the release of those arrested.” The Iranian Resistance “endorses the Resolution which ‘urges the Administration to work to convene emergency sessions of the United Nations Security Council and the United Nations Human Rights Council to condemn the ongoing human rights violations perpetrated by the Iranian regime and establish a mechanism by which the Security Council can monitor such violations,’” Samsami stressed.

Ms. Samsami added that Khamenei and his president Hassan Rouhani must be held accountable for crimes against humanity and a fact-finding mission must be sent to Iran to evaluate the scope of the crimes and examine the cases of those killed, wounded, or detained.

The Resolution underscores the fact that implementation of “a near-total shutdown of internet services, stopping nearly all means of online communications for people inside Iran” was intended “to preclude the sharing of images and videos of deadly violence being used by security forces.” The resolution “encourages the Administration to provide assistance to the Iranian people to have free and uninterrupted access to the Internet.”

The Resolution points out that “the Iranian regime was implicated in a March 2018 plot in Albania and June 2018 plot in France against Iranian opposition activists.” After the resolution was introduced in December in the House Foreign Affairs Committee, on January 15, 2020, Albania expelled two other agents of the Iranian regime who were operating under the cover of diplomats. The country’s foreign ministry released a statement in this regard, “declaring them ‘persona non-grata’ for conducting activities that go against their status and against the principles of the Vienna Convention for Diplomatic Relations.”

Ms. Samsami added that a regime’s senior diplomat is in jail in Belgium for masterminding the plot to bomb the annual 100,000-strong ‘Iran Freedom’ gathering of the Iranian Resistance, as are two of the regime’s intelligence agents in the U.S. for spying on officials of the NCRI.

Lauding the Resolutions’ support for “the right of Iranian dissidents to assemble, without fear of persecution and violence, whether in Iran or internationally,” Ms. Samsami called for increased vigilance regarding the regime’s terrorist plots against Iranian dissidents, including those in Europe and the United States.

Referring to the Resolution’s statement that “several laws provide authorities to designate and sanction elements of the Iranian regime involved in significant corruption or serious human rights abuses,” Samsami said that these Iranian regime’s officials must be sanctioned for their crimes and brought to justice by international tribunals. “We have identified 92 senior officials of the Iranian regime involved in the November 2019 suppression of the uprising in Iran; they all need to be sanctioned by the U.S. Government,” Samsami said.

The NCRI’s U.S. Representative welcomed the bipartisan initiative’s standing with the people of Iran who are engaged in legitimate protests against an “oppressive, corrupt regime” and its condemnation of the “regime’s serious human rights abuses against the Iranian people, significant corruption, and destabilizing activities abroad,” stating that “the time has come for the world to recognize the right of the Iranian people to change the repressive regime and establish a democratic, pluralistic and non-nuclear republic based on the separation of religion and state.”

These materials are being distributed by the National Council of Resistance of Iran-U.S. Representative Office. Additional information is on file with the Department of Justice, Washington, D.C.