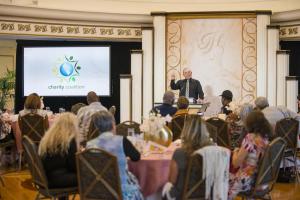 On Jan. 15, the first Charity Coalition Luncheon of 2020 in the Fort Harrison Crystal Ballroom in downtown Clearwater focused on networking and achieving goals in the New Year.

On Jan. 15, the first Charity Coalition Luncheon of 2020 focused on setting and achieving goals in the New Year.

A goal starts with a thought and you formulate a plan to make it come true. It all begins with someone thinking about their goal and getting others to follow.”
— Joel Anderson, Deputy Executive Director, Clearwater Community Volunteers

CLEARWATER, FLORIDA, US, January 28, 2020 /EINPresswire.com/ — On January 15, the first bi-monthly Tampa Bay Charity Coalition Luncheon of 2020 was held in the Fort Harrison Crystal Ballroom. Charities from garden clubs to coalitions for women’s care filled the room to network and learn how to set and reach goals for the New Year.

After a reception on the 10th floor terrace, guests were served a buffet-style lunch by the Fort Harrison’s five-star chefs and welcomed by the Community Affairs Director for the Church of Scientology Flag Service Organization, Clemence Chevrot, who served as the MC.

The featured charity for the month was the Scientology Volunteer Ministers Florida and their work in the Bahamas after Hurricane Dorian, directly helping over 600 Bahamians.

The Community Affairs Director then introduced Joel Anderson, the deputy executive director for the Clearwater Community Volunteers, a nonprofit organization that organizes annual events for children and families in the Tampa Bay area. Anderson gave an educational talk on how to set and achieve goals for one’s nonprofit going into the New Year.

“Most of us know a goal as ‘I’m going to stop smoking,’” Anderson told the audience. “A goal starts with a thought and you formulate a plan to make it come true. It all begins with someone thinking about their goal and getting others to follow.”

Following Anderson’s talk, guests shared their goals for their nonprofit with the rest of the group. This was followed by speed networking, before the event closed, to help make those goals come true.

About the Church of Scientology:

The Scientology religion was founded by humanitarian and philosopher, L. Ron Hubbard. The first Church of Scientology was formed in the United States in 1954 and has expanded to more than 11,000 churches, missions and affiliated groups, with millions of members in 165 nations. Scientologists are optimistic about life and believe there is hope for a saner world and better civilization, and actively do all they can to help achieve this. The Church of Scientology regularly engages in many humanitarian programs, such as anti-drug campaigns, human rights campaigns and global education programs. To learn more, visit www.scientology.org.

The doors of the Fort Harrison, the Church of Scientology Flag Service Organization’s signature retreat, are open for non-profit organizations and charities to hold their own events.