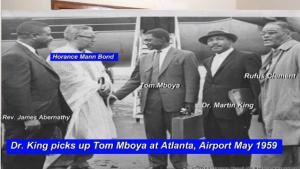 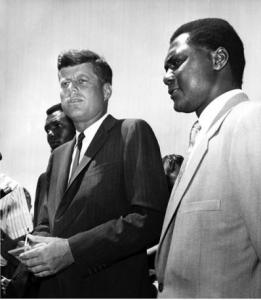 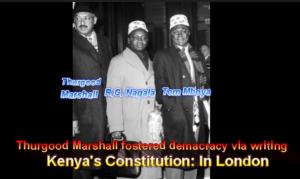 in the 1960 presidential campaign, a Kenyan named Tom Mboya visited Kennedy, Kennedy's decision to support the effort became an issue in the election and possibly a factor in his narrow victory.”
— John F. Kennedy Presidential Library

MEMPHIS, TN, UNITED STATES, February 4, 2020 /EINPresswire.com/ — It is Black History Month in America and Memphis 1st Theatrical Independent Filmmaker Anthony "Amp" Elmore is taking his fight as a filmmaker to the Black Struggle. Memphis,Tennessee has a 70% African/American population. While the foundation and wealth of Memphis was built on the free labor of African/Americans there does not exist a film or video that tells Memphis African/American history. Anthony "Amp" Elmore a Memphis 5 time World Kickboxing champion and community activist created the film "200 Years of Black Memphis History." Elmore is the first filmmaker to chronicle Black Memphis history.

Anthony “Amp” Elmore prayer in life has been to dedicate his life to building not just a better Memphis, but Elmore is looking to build a better America. Elmore in 1992 met Kenya President Daniel Arap Moi who named Elmore an African Ambassador. In the history of African/Americans gaining freedom from slavery and Africans gaining independence from Colonization, no African Country has honored African/Americans with a “Formal State Reception.” In common sense terms we African/Americans have never been formally invited to come to Africa to visit our “Ancestral Homeland of Africa.” America's White Supremacist and racist culture characterize African/Americans who identify with their African heritage as radical and unpatriotic.

While America is thrilled to watch the movie "Harriet" very soon Harriet Tubman a Black Woman will be on the twenty dollar bill. Anthony "Amp" Elmore sees his mission as being the "Harriet Tubman" of the 21st Century. The Elmore story relates to him being a Filmmaker. In 1990 Elmore premiered his 1988 Memphis produced film "The Contemporary Gladiator" in Nairobi, Kenya. While in Kenya Elmore met a "Spirit in Kenya" that would change his life forever.

Elmore has a special “spiritual relationship” between Kenya and America. Elmore was touched by the “Spirit of one of Kenya’s Founding fathers Tom Mboya.” Elmore confidently understands that the “Spirit of Tom Mboya" and Dr. Martin Luther King Jr. connects Memphis together with Kenya.

Unknown in history Dr. King was associated to the birth of Kenya. In 1959 the S.C.L.C. sponsored Kenya's Tom Mboya an African Freedom dinner in Atlanta.

Elmore's goal is to get Kenya President Uhuru Kenyatta to come to Memphis and honor the legacies of Dr. Martin Luther King Jr. and one of Kenya's founding father Tom Mboya via inviting African/Americans to visit their ancestral homeland whereas Kenya would be the first African Country in world history to honor its African ancestors with a "Formal State Reception."

Elmore is proposing a Kenya/Memphis "Joint Film agreement" whereas international relationships are developed via filmmakers working together to develop friendships and relationships. Memphis Filmmaker Anthony "Amp" Elmore would write,produce, direct the Tom Mboya movie in association with a Kenyan producer director. Memphis, Tennessee is the only City in America that honored the legacy of Tom Mboya. Memphis Congressman Steve Cohen honored Tom Mboya's 60th at the home of Anthony "Amp" Elmore in 2016.

In 2019 Memphis honored Tom Mboya via the "Tom Mboya Royal Unity banquet". Elmore explains that one of the greatest tragedies of both American history and Kenyan history is our letting the story of Tom Mboya die. Anthony "Amp" Elmore is appealing to both America and Kenya to "Do Right by Tom Mboya" via Kenya supporting a movie that tells the Tom Mboya story.

Anthony "Amp" Elmore has a "special role in Kenya." While Tom Mboya was Kenyan there exist a "Tribal Conflict" in Kenya that destroys and inhibits the significant of Tom Mboya in Kenya. We African/Americans have no concept or understanding or prejudice regarding African tribes. While Tom Mboya was of the "Luo Tribe," if a "Luo" man told the story he would face the possibility of prejudice and tribal conflicts. We in America are a better option to produce the Mboya story than a Kenyan. Anthony "Amp" Elmore wrote, produce, directed and performed the "Tom Mboya Spirit of Unity Song."

Memphis, Tennessee has the opportunity to tell and expose some of America's most important history. The birth of Kenya was not only a part of the American Civil Rights Movement the influence of Kenya and Tom Mboya is "Black History" and American history untold." It was because of Tom Mboya and the John F. Kennedy relationship that lead Black Americans to change from "Republican to Democrat."

Elmore explains that Kenya is important to the well being, development and evolution of America. While science proves that race is a "Social Construct" There is a story of race regarding Kenya's Tom Mboya and William X Scheinman. Scheinman was a Whiteman who fought for the Independence of Kenya along with many Whites and Blacks from America. William X Scheiman loved and respected Mboya who was assassinated in 1969, when Scheiman died 20 years later he was buried beside Mboya in Kenya in 1999.

Kenya has not honored the pioneers from America who helped to develop Kenya. Elmore explains Kenya's birth is a story that includes dynamic American history and culture.

Kenya Governor Peter Nyong'o and African dignitaries recently made a historic visit to Memphis that paves the way for not only for the Kenya President to visit Memphis, the Kenyan recent visit paves the way for an International project of Memphis and Kenyans who will create and tell the world of the historic Tom Mboya Story. The Greatest African to Influence America.

Kenya’s Birth was part of the American Civil Rights Movement