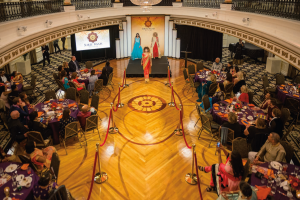 After a prayer in celebration of friendship and sharing, attendees enjoyed a traditional Indian meal prepared by the Fort Harrison chefs. While dining, Bollywood videos played for the attendees to get a taste of the Bollywood culture. Bollywood produces around 1,000 films every year – almost double the output of Hollywood. Around 14 million Indians go to the cinema every day, which equates to 1.4% of the entire population.

Following dinner was a Bollywood-themed fashion show featuring the designs of a local Indian fashion designer. The models wore several different types of clothing, finishing the show with wedding attire.

“The Temple’s goal was to do some capital improvements to the building so it won’t be flooded each year by the rains”, said Seema Ramroop, organizer of the fundraiser and parishioner at Shree Raam Mandir. “And this is a great way to help that cause, while experiencing something cultural. This event was a fun night with an ocean of color, radiance and beauty. We all had a great time and helped a great cause.”

Shree Raam Mandir enhances and promotes the learning of the Hindu religion, culture, and traditions through practical and theoretical teachings in which all devotees can learn and grow as Hindus, the Temple is located at 7411 E Comanche Ave, in Tampa. Visitors are welcome to attend services on Sunday at 10:30AM.

Since its construction in 1926, the Fort Harrison in Downtown Clearwater has been the home for many community events and charitable organizations. The Fort Harrison’s current owner, the Church of Scientology, has hosted over 500 community events there since a top-to-bottom restoration in 2009. The Scientology religion was founded by humanitarian and philosopher, L. Ron Hubbard, and incorporated in 1954. To learn more, visit www.scientology.org.