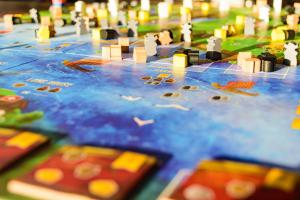 The Clearwater Community Volunteers Center hosted its first ever family game night on February 1st. 21 people from local families reveled in the activities.

CLEARWATER, FL, UNITED STATES, February 6, 2020 /EINPresswire.com/ — On Saturday 2nd February the Clearwater Community Volunteers Center was the scene of a family game night. The event brought families together to play games and encouraged attendees to ditch electronics for the evening.

“Over half of American kids have a smartphone by the age of 11,” said Michael Soltero, the Manager of the Clearwater Community Volunteers Center. “That means less time spent socializing, less communication within the family and less time to engage with one another. So why not organize an old-school family game night with board games?”

For the occasion, the staff of the Center set-up each room of the center to accommodate a different game. From Monopoly to Jenga, there were plenty of places for families to play. A competition between teams was organized, encouraging families and friends to meet one another and share quality time.

The family winning the most games was awarded the “Best Gamer” prize.

“There is quite a lot of good that comes from playing games” said Soltero, “Scientology founder L. Ron Hubbard once wrote: ‘If you were capable of the spirit of play and playing a game and pretending – you’re in a position where you can play the game called reality.’ ”

Board games have been played and have evolved in most cultures and society throughout history. The earliest recording of such games are from Iran, Egypt and India. The late 1990s onwards have seen a constant growth of interest in board games. The rise of the internet developed that interest and made it easier for players to connect. Board game venues are also growing in popularity.

To find out more information about the Clearwater Community Volunteers Center or about upcoming events please call Michael Soltero at (727) 316-5309 or email ccvcenter@ccvfl.org.

The Clearwater Community Volunteers (CCV) have over 26 years of community service under their belt with over 150,000 families and children helped since their founding in 1992. Sponsored by the Church of Scientology Flag Service Organization, they stay true to their reputation of helping others with their center located on the corner of Fort Harrison Avenue and Drew Street in downtown Clearwater. Based on fundamentals developed by Scientology Founder L. Ron Hubbard, the CCV Center works with area non-profits to help these groups better attain their goals.