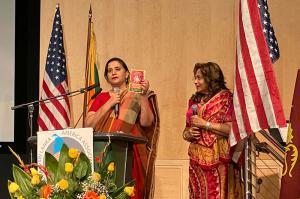 Aeshea Jayasinghe (right), vice president of the Sri Lanka Foundation, and Naseema Qureshi, The Way to Happiness Ambassador to South Asia, were the guest speakers. 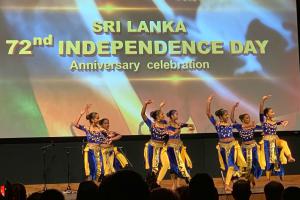 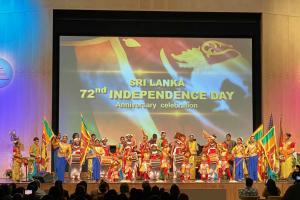 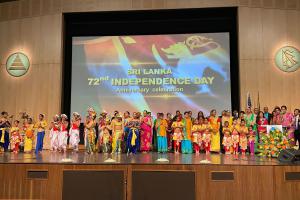 Independence Day was a joyous occasion at the Church of Scientology of the Valley.

The Southern California Sri Lankan community gathered at the Church of Scientology of the Valley to celebrate their freedom from English rule.

LOS ANGELES, CALIFORNIA, UNITED STATES, February 19, 2020 /EINPresswire.com/ — Independence Day is a time of joy for Sri Lankans, who marked the 72nd anniversary of their independence this year.

The event celebrated the culture of the South Asian country. From the women’s beautiful saris and the colorful costumes to the lively music and dance, it was an evening filled with enthusiasm and pride.

The Independence Day speech of Sri Lanka President Gotabaya Rajapaksa, elected in November 2019, was read in three languages to the audience. He called for unity, tolerance and respect among the country’s religious and ethnic groups.

“I represent the entire Sri Lankan nation irrespective of ethnicity, religion, party affiliation or other differences,” he said.

Special guest speakers were Aeshea Jayasinghe, vice president of the Sri Lanka Foundation, and Naseema Qureshi, who spoke of her work brokering peace among opposing factions in the wake of the country’s 30-year civil war that shattered national harmony, pitting religions and cultures against one another.

Qureshi, The Way to Happiness Ambassador to South Asia, is featured on the Scientology Network in an episode of Voices for Humanity. She spreads harmony using the common-sense moral code The Way to Happiness. She has distributed more than 100,000 copies of The Way to Happiness and delivered dozens of seminars in schools, community groups and religious institutions to bridge differences and foster tolerance, harmony and peace.

Qureshi presented the moral code, written by humanitarian L. Ron Hubbard and comprised of precepts held in common by people of all religions and beliefs, to the leaders of all four of the country’s major religions. Each of them embraced the booklet and saw it as a means to accomplish their common goals.

The police of Colombo, the country’s capital, saw the value of the booklet. They took on the project of distributing copies throughout the city. The program also gained the support of the Ministry of Tourism, the Presidential Task Force and other government officials. Today, The Way to Happiness is widely used in schools and government institutions across all of Sri Lanka.

The Church of Scientology of the Valley hosts community open houses, concerts and forums and makes its auditorium available for nonprofit and cultural programs as part of its mission to bring together, enhance and uplift the community.

To learn more about the Church of Scientology of the Valley, watch Destination Scientology: The Valley on the Scientology Network.