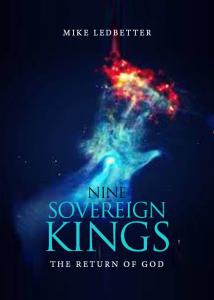 What you believe is what you will receive

Nine Sovereign Kings: The Return Of GOD. NASA's photograph of the Hand of God in Cosmos was really the Hand of GOD – see story below and new book release

This is one breaking news story you do not want to miss. NASA's photograph of the "Hand of God" was the forerunner to this Book. God Speaks to us that we must term-limit our U.S. Supreme Court!”
— The Book

Live: Hi everyone, this is your news station “TV Channel/Radio Station _____”. We have a breaking news story for you (this morning, afternoon, or evening?). It is up to you to believe this, but if all you recall our news story in February and March 2014 on the “Hand of God” – a interstellar formation that appeared in our Cosmos that NASA photographed and was witnessed worldwide. Believe it or not, this anomaly has appeared again, and if you believe it, it is better. For it has appeared on the exact same month and days as before on a Book’s cover- where the author of this Book claims he was inspired by our God to write to reveal the reason for the Hand of God appearing.

That said, this book is called “Nine Sovereign Kings: The Return of God.” Is this a coincidence, or is God trying to tell us something and guide us with His Hand? And this author claims that God revealed to Him that our Hand of God in our Cosmos will soon have fire shooting from all the fingers as they move, if you can believe that. And he said it is the evidence that his book reveals the purpose of our Hand of God in our cosmos. Let me reiterate for all who are listening, this book whose cover, front and back, is on the screen now, is claimed by its author to reveal the purpose for the Hand of God in our Cosmos. It is up to you to decide. And coincidences aside, and you know what I mean here, you will not believe what the main purpose of this book is. It is to help the American People, all of us, term-limit our unaccountable and unremovable Supreme Court – thereby helping each of us regain our full and complete status as the only Rightful and True Sovereigns – over our Nation.

That said, his credentials for helping us match his abilities, for he has a Doctor of Jurisprudence when speaking on this issue. And he claims that God inspired him to help us heal our Nation. What do you think the American People, is this really the Hand of God that NASA photographed and that is on the cover of this book? Is this our Family, Our Creator, wanting to help us save our Nation and children? It is claimed in the book that an oversight occurred with our Supreme Court. Moreover, the oversight was in not seeing, in a democratic experiment as ours, that a Co-equal Ruler at the Highest level in any Democracy is never allowed to have life-tenure. It hurts both our Nation and People if that occurs and removes the true Sovereignty of the People from their hands into the hands of the Co-equal Ruler with life tenure.

That said, Is this author accurate. Is there any evidence in our Nation’s history supporting his claims? And if there is, could this really be the Hand of God returning to save us, and you know what I mean here. if it is, what does it mean? If really His Hand both over our Universe and on this book, and it might be, it is also true each of us must decide whether it be. For He will reveal Himself to us and always do His part if it is Him, knowing we will recognize both Him and His Hand when we see it. This has been shown time and time again. For in our War for Independence against the most Powerful Kingdom in the world, it is known by many that our God appeared and fought side by side with George Washington, and our American forces, leading them to Victory against all odds. Therefore, this news reporter believes it might be Him, because the coincidences here in this story are too great, and whether Him or not, for that reason alone, and God would agree with me, it is my responsibility to release this information to each American to choose for themselves

That said, for those viewers who would like to know more about this book, I being one, the information for doing so, along with the Publisher, Legaia’s phone number, is on your TV screen. In addition, once this book is fully released, we will know for sure if all this is more than a coincidence, but the actual Hand of God here to help us. Turning now to our next news story, it is one of citizens (in the city, state, or nation) helping one another….