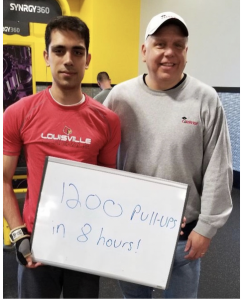 The key to success is perseverance, gratitude, and hard work. ”
— Faizan Ahmed

Just a year ago, University of Louisville Medical Student, Faizan Ahmed, attempted a challenge few would ever dare to try. He set a goal to do as many strict pull-ups he could do in 8 hours. His goal was to raise money for the victims of the New Zealand Mosque shooting that occurred last year. By the end of the 8 hours, he completed 1200 pull ups. He was sponsored by a company called Class 101 for a dollar per pull up. All proceeds were donated to a fund set up to gather money for the victims.

During the TEDx talk, Faizan Ahmed talked about his experiences of witnessing a bomb blast to seeing his own family members held hostage in a terrorist attack in Pakistan. He explains in his talk that these events had a profound impact on him growing up.

When the New Zealand attack occurred, he wanted to be able to help the victims of the talk doing what he loved: pull ups. As an amateur boxer in his free time, he used intense boxing and Brazilian Ju jitsu training to stay in shape at Jeff City Boxing under trainers Jeremy Voyles and Bradley Murphy. With strict dieting and 2-3 workouts a day, he surpassed his original goal of 1000 pull ups and did 1200 on the day of the actual event.

In his talk, he advocates for building discipline, taking responsibility for one's own actions, and remaining grateful every day. He ends his talk by explaining that the motto he grew up and will pass down through future generations is "Love for All, Hatred for None." He explains that having empathy and love for others despite race, religious, or any other differences is fundamental in being able to make a change in this world.

Watch his TEDx talk with the link: https://youtu.be/ZQ2SYpBYsRo