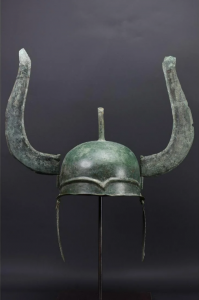 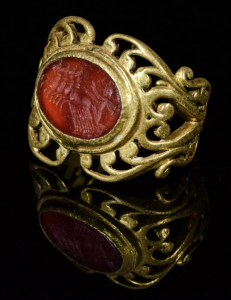 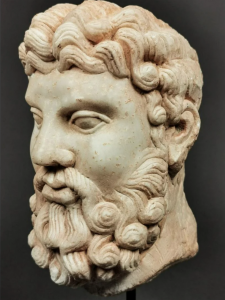 This is our finest sale to date, with many unique artifacts and important works of art from distinguished collections.”
— Dr. Ivan Bonchev, Director, Pax Romana

LONDON, UK, March 25, 2020 /EINPresswire.com/ — Discerning collectors of antiquities and ancient art know the Pax Romana name represents uncompromising quality and authenticity. While the London firm, headed by Dr. Ivan Bonchev (PhD, University of Oxford), conducts business from a tastefully appointed gallery in central London, many of its sales to international customers are transacted through LiveAuctioneers’ online-bidding platform. The next fully curated event – a no-reserve auction of ancient jewellery, weaponry and classical art – will take place on Sunday, March 29.

“This is our finest sale to date, with many unique artifacts and important works of art from distinguished collections,” Dr Bonchev said. “As always, we’ve prepared a selection that spans a wide price range to accommodate beginners as well as advanced collectors and dealers. All can find something in our sale.”

The auction’s centerpiece is a spectacular circa 400 BC Greek bronze winged helmet with provenance from the legendary collection of Axel Guttmann (1944-2001). Starting out with a Roman helmet purchased in 1982, Guttmann built a world-renowned collection, which he housed at his private museum on the outskirts of Berlin.

“We are privileged to offer this highly important helmet that was once part of his landmark collection,” Bonchev said. “Without question, it is the best helmet I have ever handled.” Of Chalcidian style and formed of heavy sheet metal, its design incorporates cheek-pieces, a long plume-holder at its crown, and a pair of magnificent wings. It is estimated at £40,000-£60,000 ($49,000-$73,600).

Two other helmets of exceptional quality and rarity will share the spotlight in the Ancient Weaponry portion of the sale. A superb Greek Illyrian bronze helmet of domed form, with two corrugated parallel ribs to the upper region and a flaring neck guard, is similar to an example from the Christos G. Bastis collection auctioned by Sotheby’s in 1999. It could reach £25,000-£50,000 ($30,700-$61,400) on auction day. Estimated at £20,000-£40,000 ($24,500-$49,100), a museum-quality Villanova (Etruscan) hammered bronze helmet with an attractive punched geometric pattern and duck heads comes from a 50-year Cambridgeshire (England) family collection.

An enviable selection of ancient, wearable jewellery is led by a circa 100-300 AD Roman gold ring with high-relief cameo depicting Hercules and the Nemean Lion, a ferocious monster in Greek mythology. “In the time of this ring’s creation, cameos were extremely hard to carve, so they were very expensive and owned only by the privileged upper class. On the hand of a high-positioned politician or military commander, this ring was as much a status symbol as the costliest diamond Rolex watches are today.” The ring is estimated at £6,000-£12,000 ($7,360-$14,730).

A substantial Roman gold intaglio ring with a sophisticated openwork design has a central carnelian bezel carved with a depiction of Salus Invctus (Roman god of safety and well-being) riding in a chariot. Dating to circa 100 AD, this ring is of a type that would have been owned by an important and powerful person, Dr Bonchev said. Estimate: £5,000-£8,000 ($6,140-$9,820)

Yet another jewellery highlight is a gold snake ring from the Romano-Egyptian period, circa 100 AD. It features an imposing central garnet cabochon and additional smaller stones. Elegant and elaborate, it comes to auction with a £4,000-£8,000 ($4,910-$9,820) estimate.

A rare Greek limestone head of the god Apollo dating to circa 300 BC exhibits facial features and curly hair that would have required considerable artistic talent to achieve. Similar to an example in the Metropolitan Museum of Art’s collection, it stands 380mm (with stand) and is estimated at £15,000-£30,000 ($18,410-$36,800).

Boasting extraordinary size and beauty befitting the goddess of love, a monumental Roman bronze statuette of Venus, circa 100-200 AD, stands 220 x 70mm high. In a graceful standing pose with right arm extended, palm upward, the figure’s hair is arranged in a topknot with a chignon at the neck and wavy tresses falling onto each shoulder. The statuette’s provenance includes the collection of R. Unger, and the London Ancient Art Gallery. Estimate: £15,000-£30,000 ($18,410-$36,800)

The mysteries of Ancient Egypt are embodied in a circa 764-332 BC wood statue of the god Ptah-Sokar-Osiris. Its form represents the wrapped deceased, and on the figure’s head is a striped tripartite headdress with a crown of ostrich feathers and cow’s horns. A vertical column of hieroglyphic text runs down the front of the body and legs. Well preserved on its original untouched base, and with considerable original pigmentation intact, it is surely deserving of its £6,000-£8,000 ($7,360-$9,820) estimate.

A very nice collection of Greek Hellenistic terracotta vessels, each bringing an ancient myth back to life through its decoration, includes an amazing Greek Apulian bell krater with a depiction of standing female holding an offering tray on one side and possibly a young Dionysius holding a crown on other side. A wide-mouthed form, it measures 290 by 310mm. Estimate: £4,000-£6,000 ($4,910-$7,360)

All auction items sold by Pax Romana are accompanied by a professional Certificate of authenticity signed by Dr Bonchev. The company ships worldwide, and all packing is handled by white-glove specialists in-house. View the fully illustrated March 29, 2020 catalogue and sign up to bid absentee or live online through LiveAuctioneers. Questions: call Pax Romana, London, on +44 7424 994167 or email director@paxromana.auction. Online www.paxromana.auction.